The design rationale behind the new function venue at Louisvale Wines is a considered marriage of African and European building traditions.

Louisvale Wines on the slopes of Devon Valley near the town of Stellenbosch arguably has one of the most beautiful settings in the Cape Winelands. Now, a fitting new function venue and revamped tasting centre have opened their doors to enhance visitors’ experience of the farm and the wines.

The anthropological history of the area was the inspiration for the building’s unusual design. As Christof Albertyn, the architect behind the project, explains: “The first inhabitants of this area were the Khoekhoen, who practised nomadic pastoral agriculture and hunted for food close to what is now named the Eerste River. In the summer months they would move to the coast, where they lived off seafood such as perlemoen and alikreukel (periwinkle). The Khoekhoen also built the first man-made structures in the area: domed huts, or matjieshuise, were constructed from taaibos laths covered with woven reed mats and animal skins.”

When Europeans arrived here in the 17th century, they introduced vines and oak trees to the area and built white-plastered gabled houses.

What Christof has achieved at Louisvale is a sensitive fusion of these two diametrically opposed building styles. 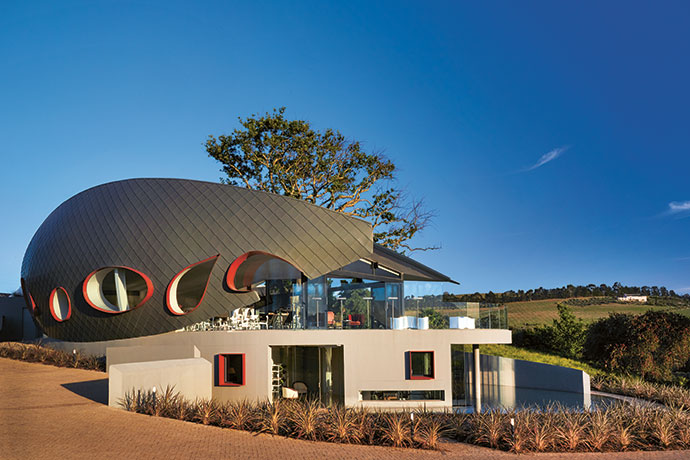 Rheinzink square tiles were used to clad the curved dome of the function venue. The windows were designed to resemble the row of apertures along one side of a perlemoen shell.

“The soft curve of the Rheinzink cladding reflects the shape and surface of a Khoekhoen reed mat hut,” says Christof. “The dome is supported by curved steel rails and connected by floating glass to the concrete floor, which is embedded with polished perlemoen shell chips.”

Known for its lightness, strength and durability, Rheinzink is a trademarked name for titanium zinc. This material doesn’t require regular maintenance and the aesthetic patina created by natural weathering protects it for decades. Rheinzink also requires little energy in production and is 100% recyclable, meeting today’s design considerations for sustainability and low energy use.

The dome hovers over a low concrete roof, which has been planted with restios to reference the thatched roof of the Nieu Cape Dutch-style manor house, built in 1924, right next to the new building.

In strategic places, the dome facade peels away in organic curves to make the most of the views of the mountains in the distance. The end result is a dramatic, intelligent departure from the expected.