With a name like WHATIFTHEWORLD – part question, part challenge, part statement of truth – the highly regarded Cape Town gallery had to be certain its new premises contained all of that potential.

Moving through the WHATIFTHEWORLD exhibit capsules, something to stimulate you at every turn, it’s hard to imagine the gallery’s former life as a garage. This is the second move and third premises of the contemporary art gallery, and much like its own evolution in the past decade, the 600 m2 space has been completely reimagined.

It took the artistic vision of gallery director Justin Rhodes and gallery curator Ashleigh McLean to see the potential of this unrefined blank canvas. With an impressive roster of artists that includes Athi-Patra Ruga, Mohau Modisakeng, Lungiswa Gqunta, Cameron Platter and Thania Petersen, among others, this duo certainly have an eye for the exceptional. 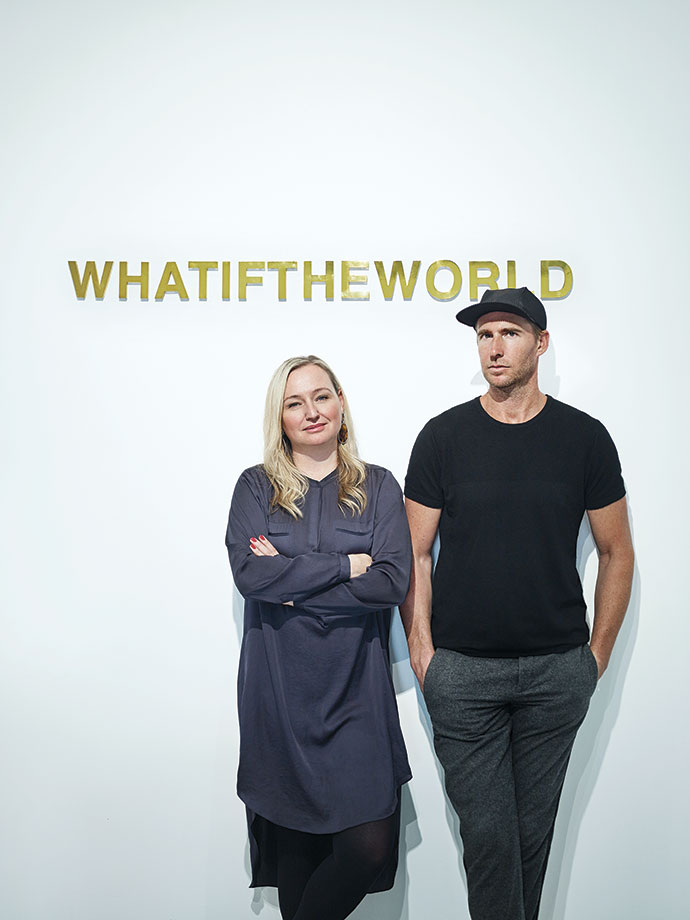 And finding a space that could contain the diversity of their artists, sometimes collectively, was part of their approach. Taking what they’d learnt from the previous gallery spaces and inspiration from extensive international travel, Justin and Ashleigh carved out the expanse. Designer Marco Simal and architect Jacques Mouton provided creative and technical input, with Justin and Ashleigh weighing in on aesthetic and practical requirements.

Justin took design inspiration from the Venice Biennale’s method: “They take an old building with old halls and old ceilings and they erect these super-crisp white walls. There’s a mix of new and old; it looks temporary, but it’s not. The fact that we could build from scratch, yet it appears almost like a set design, that appealed to me.” The dark ceiling, beams and ductwork have been left exposed; the use of a shadow line makes the walls appear to float.

The sharp edges and interesting angles of the internal architecture, purposefully distinctive from other galleries, allows the team to programme projects into the fit-for-purpose smaller boxes. “Bigger is not necessarily better,” says Justin. “Not every artwork is best viewed in an enormous space. We wanted to create more intimate spaces to also give young artists, who perhaps aren’t ready for a whole show, an opportunity.” The smaller cubes also lend themselves to collaborations, art merchandise from a particular exhibition, pop-ups and, well, anything. The addition of a dedicated moving image room equips the gallery for continued expansion in the multimedia realm. Sophisticated concealed projection and soundproofing ensures it can still be adapted to suit a more traditional exhibition.

Justin and Ashleigh refer to the return to Cape Town’s CBD as a homecoming of sorts. (WHATIFTHEWORLD was initially in Hope Street before moving to Woodstock.) Just off Bree Street, it’s undeniably a good neighbourhood, yet the building itself is fairly unassuming. “We wanted it to be low-key from the outside. The sign is quite small. In Woodstock the building was a big presence, whereas here the inside is, which is interesting,” says Justin.

One benefit of the new address is easier public access. Justin masterfully adapted the existing ramp (also a practical way to deliver large-scale pieces) so that arriving, or, more accurately, ascending, is an experience. It builds anticipation and feels like an apt embodiment of the intrigue that the gallery’s name piques.

“A key word we thought about while designing the gallery is ‘thresholds’,” says Ashleigh, who describes the entrance threshold as a palate cleanse that enables you to enter the gallery in an open and receptive state. “We wanted people to feel like they were going through different phases, an accumulation of experiences broken into stages.”

Instead of being met by an often-times intimidating reception desk, here you turn and are confronted by the work itself. “Every time you visit, we want it to be something very strong,” says Justin of the pieces in the main gallery, which are often commissioned in an approach that puts the work and the idea front and centre rather than the format or the context.

“The space is in constant evolution. It’s an endless work in progress, and that’s what prevents it from being predictable and formulaic. We want to play and have some fun, too.”

To keep up to date with the latest exhibitions, visit whatiftheworld.com.