Modernist principles and a reverence for the site have ensured that this monolithic holiday home in the Hemel-en-Aarde valley is integrated in the landscape.

Turning off the Hemel-en-Aarde Road, it’s a bumpy, winding assent to this unconventional house overlooking the valley and Fernkloof Nature Reserve. It appears all of a sudden on the rise above you. Well, its narrowest side does. Around another bend and you approach it from its side elevation and glimpse its low horizontal footprint. Then you’re right up against the monolithic facade as you make the last turn into the driveway.

Knysna-based architect Guillaume Pienaar of Pinard Architecture was tasked with building a holiday home for an active family of five in a disused quarry – a scar on the otherwise untouched fynbos landscape that had been zoned for a single dwelling. With an open brief from the international owners for a simple home that maximised the position and minimised the impact on the surroundings, visually and ecologically, the first stage was to find the orientation.

To experience it in 360 degrees throughout the day, Guillaume decided to camp on-site. He took walks with a neighbour who knows the area and its flora, fauna and frequent fires. “In this natural setting, we wanted to keep the visual impact towards the valley floor to an absolute minimum; and we managed to do this by not only pushing the building away from the valley rim but also orientating it to face the other way, leaving only the short side visible from below.

The four bedrooms and main open-plan living and dining area all make the most of the east-to-west orientation, with large windows to track the passage of the sun and provide an abundance of natural light.

Guillaume identified the natural mound as the perfect position to tuck the structure into, with the first-floor bedrooms sticking out above it. The characteristics of the site determined the aesthetic: Dark brick cladding blends in with the landscape, and a bright, light interior echoes the white sand of the quarry.

“I believe in design that responds to the site and its conditions,” says Guillaume of his functional approach to setbacks and apertures. The deep reveals, for example, allow the sun to penetrate deep into the interior during winter, whereas in summer they prevent the harsh sun from entering.

In the brick cladding, Guillaume expresses more of his adherence to the “honesty of materials” philosophy: using the most appropriate building material without hiding or faking its nature. “My clients wanted something light and simple internally, and for the structure to disappear into the landscape,” he says. “I thought of painting the building a dark colour, but had to consider fires and how heat would affect it. In the end, brick just made sense. It’s a beautiful little building block.” 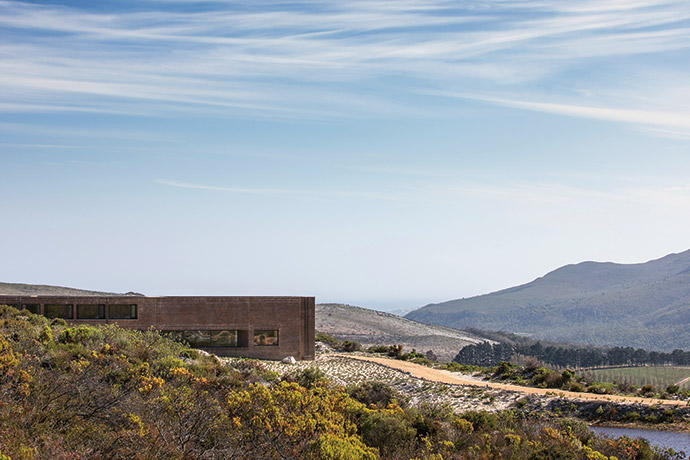 They settled on the rustic Corobrik Cape Stormberg for its colour and rough texture. It’s also from the area, readily available and, perhaps most importantly, it is a robust material. The entire building is clad in this dark clay brick skin, which serves the house thermally, requires no maintenance, blends into the surrounding landscape and, most importantly, protects the structure from veld fires, a frequent occurrence in the area. A set of steel outer doors conceals the wooden front door, so in case of a fire the structure should remain intact.

There may be no frills, but this doesn’t mean there isn’t detail. Not added detail, Guillaume is quick to emphasise, rather unobtrusive accents of the building’s construction. “I wanted to be honest with the structure,” he explains. “With the expansion joints, for example, we turned a brick in a different direction to make a subtle pattern.”

Look a little closer at the interior finishes and you’ll see a complex puzzle of joints and junctures: The skirting becomes the reveal for the window, which becomes the doorway, which becomes the cupboard. Guillaume worked with candidate architect Theodor de Goede on refining the detailing, which was adapted on site with insights from the Quali-Projects construction team and cabinetmaker Herbert Robinson.

Easy to maintain and easy to live in are two hallmarks of a practical holiday house. The deft joinery throughout offers warmth to the intensely minimal interiors and plenty of nooks, as requested by the owners, to store everything out of site. Modernist master Le Corbusier’s famous quote comes to mind: “A house is a machine for living in”.