A heritage villa has been both respectfully restored and modified to retain the home’s period character and give it a sophisticated contemporary feel.

Above the front door to Stefan Rupperti and Alexander Yazdi’s Victorian villa in Cape Town is an inconspicuous brass plaque that reads, “At this site in 1860 nothing happened.” This declaration is as comforting as it is intriguing. In the 160 years that have passed, much has happened. For one thing, the surrounds have wholly transformed.

Once farmland bordering the edge of town, today this area is the vibrant suburb of Gardens, and the house is set amid properties that neighbour Orange Street. A busy artery that lies under the shadow of Table Mountain, the road courses into the City Bowl, bustling with trendy bars and eateries. “Because our stays were getting longer, we wanted a second home in an environment that would make us feel integrated rather than transient,” says Stefan, speaking of the sojourns they had been making to Cape Town from Berlin for the past 10 years.

When they bought the house in 2018 it had seen significant changes, but its core features retained integrity. Key to the property’s authenticity is the façade, featuring a stoep that escaped any enclosures over the years. “Coming from a city that was virtually demolished during World War II, the idea of living in a historic home filled with the richness of the past was alluring,” Alexander explains. “Our aim was to redeem the original details and create contrast with contemporary elegance.” 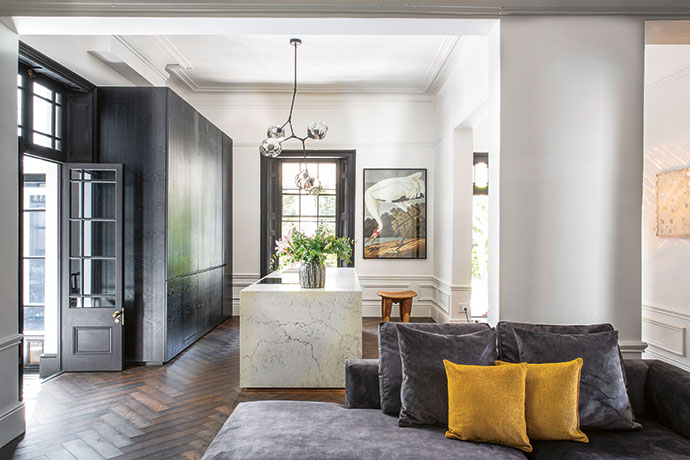 In keeping with the period character of the house, decorative mouldings bring interest to the expansive walls and ceilings while complementing the sleek kitchen. A Branching Bubble chandelier by Lindsey Adelman offsets the orderly aesthetic with an organic, sculptural quality.

The undertaking involved removing existing features that had not met with approval from the National Heritage Council – a roof terrace, and a spa and yoga studio that had been created by demarcating areas of the interior with drywalling. The commercial spaces were reconfigured as a self-contained apartment and, for the windowless main bedroom, an inspired solution was created – a narrow perimeter garden that functions as an atrium, drawing plentiful sunlight into the bedroom and adjacent dining space via metal frame windows. Practical as well as decorative, the openings offer a subtle, contemporary reference to the house’s Victorian cottage pane windows.

The main bedroom is a glamorous yet composed affair: echoing the curve of the dropped bulkhead, a low built-in wall clad in wood veneer ensconces the headboard. Recessed curtain tracks allow the bed to be shrouded by sheer white drapes, creating what Alexander describes as “a sense of floating in a silk cocoon”. With the design of new fittings, Stefan and Alexander’s choices were driven by an intention to elevate the house’s period character. Rather than beg for attention, elements work together to create a look of understated sophistication. In the kitchen – against a backdrop of herringbone-laid hardwood floors, cornices and wall panelling – seamless cabinetry offsets an engineered-stone island to create a slick, minimal ensemble with which the grand sash window melds effortlessly. “We enjoy the ambiguity of the space. It would hold its own just as confidently in the reception of an ad agency or an upmarket boutique,” says Stefan.

Furniture is a handsome showcase of mostly local design, punctuated by a handful of iconic pieces. A Doctor Sonderbar chair by Philippe Starck lends a corner an arresting sculptural quality, as does a quartet of Panton chairs in the conservatory-like dining room. On the veranda, Malawi cane chairs and Bamileke and Senufo stools are favoured. “We spend the better part of most days out here, in view of the magnificent 80-year-old frangipani tree,” says Alexander with a smile. “It produces the most beautiful carpet of sweet-scented flowers… pure luxury.”