With panoramic views of Table Mountain, this newly built home reconciles high design with family living – and has fun doing it. 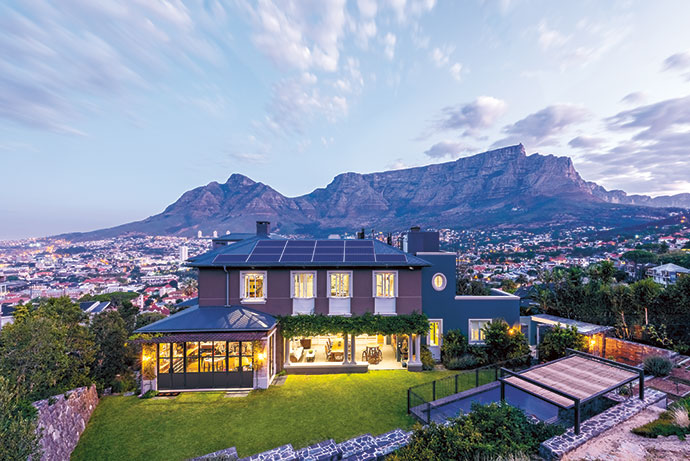 Situated at the top of a steep street, the city view from the house – designed by Wynand Wilsenach Architects – is unparalleled.

Sitting proudly at the top of one of the most gear-crunchingly steep streets in Cape Town, this family home is imbued with a unique combination of ebullience and lived-in-ness. It’s a blend created by the artistic eye and deft hand of its owner.

“When my husband and I approached Wynand Wilsenach Architects to build the house,” Paula says, “we had a few non-negotiables, like a large front and back lawn for our children, and enough open spaces inside the house for them to run around. Most of all, we wanted it to be a place we could call our forever home.”

Paula isn’t kidding about the last part. Step out of the rambling lounge-kitchen area onto an airy patio overlooking the city, and one wall is covered with an illustrated tiled mural depicting the family tree, created by Cape Town artist Michael Chandler. “He made a note of all the plants growing against the part of Table Mountain that’s behind the house and included them in the work, along with elements that were significant to our family. We’ll never leave this house, because we can’t leave behind our family tree,” she says. 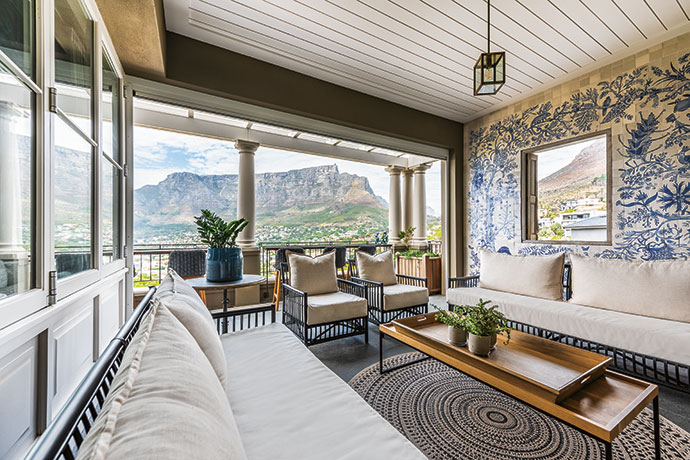 The family tree, as illustrated by Michael Chandler, overlooks the patio.

Chandler’s is just one of seemingly innumerable artworks adorning the interior, which Paula designed in collaboration with Liesel Rossouw of Ginger Lee Interiors. The aesthetic axis around which the kitchen – and the entire open-plan living area – operates is one of Caryn Scrimgeour’s bold table-setting still lifes, in a happy pink. “It was Liesel’s idea,” says Paula. “She said, ‘Who says you can’t put a painting in a kitchen?’ Because everything is so open-plan, we didn’t want a kitchen that looked like a kitchen.”

Also contributing to the “non-kitcheny” aesthetic is the unconventional floor of glazed green tiles arranged in a herringbone pattern, custom-made by Gerrit Oosthuizen of Southern Art Ceramics, and the steel kitchen island designed by Wynand, which adds an industrial edge to the space, along with the brass-and-wood drinks cabinet that Liesel and her husband Sias, a carpenter, designed.

While there is evidence of four 10-and-under kids to be found all over the house, their official den is the playroom downstairs. Another specially commissioned mural – this one by Lucie de Moyencourt  – takes up the whole of one wall, depicting Table Mountain centre stage and featuring the eldest three kids peeking from behind a curtain on the right. “We still have to ask Lucie to draw in our 10-month-old!” says Paula.

The top floor houses the family’s five en-suite bedrooms, each with their own unique personality – and enviable art collection. Ten-year-old Christo’s bedroom, for example, has a surfer theme, boasting a custom-built steel platform bed with a hammock suspended underneath; nine-year-old Sophia’s room is punctuated with pink flamingos; and five-year-old Johan’s space is all about dinosaurs and bugs, and culminates in an elaborate mosaic mural by Lovell Friedman in its en-suite bathroom. 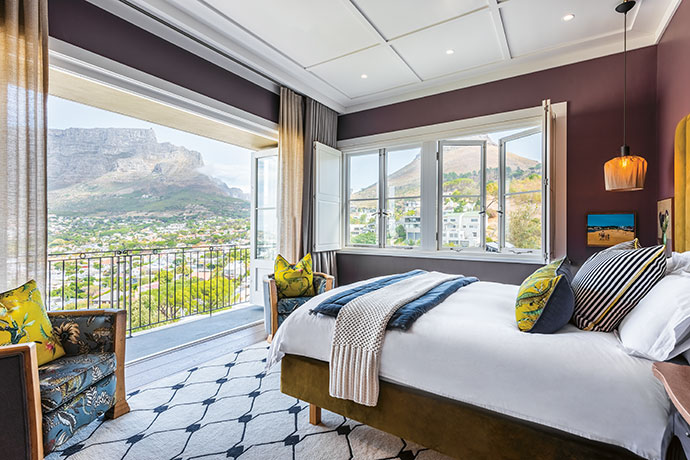 Walls in a dramatic shade of plum and luxury fabrics by Ardmore create an opulent feel in the main
bedroom.

These are the rooms of kids whose mom gets them – just like she understands the fact that, sometimes, they’d rather explore her black-and-white chandelier-appointed study, or the luxuriously appointed guest room with its antique haberdashery cabinet, when she’s not looking. You can’t blame them: in this house, there is wonderment to be found at every turn.