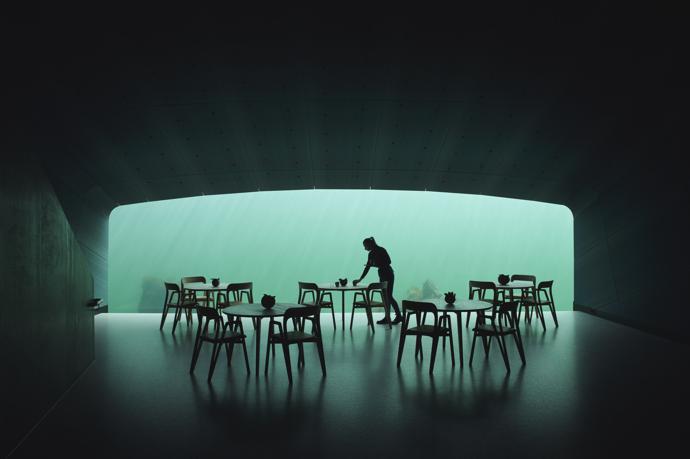 In Norwegian, “under” has the dual meaning of ”below” and ”wonder”. Appearing to have washed up on the shore, the amazing, partially-submerged 34 m-long monolithic structure rests directly on the seabed 5 m below. With its half-a-metre thick concrete walls, the structure is designed to withstand both the pressure of the rugged coastal conditions and to fully integrate into the marine environment over time.

Located at the southernmost point of the Norwegian coastline where the sea storms from the north and south meet, Under also functions as a research centre for marine life: Marine species flourish at this site and, in addition to the restaurant, the building will host research teams studying marine biology and fish behaviour. Cameras and other measurement tools have been installed in and on the facade with the goal of documenting the population, behaviour and diversity of the species that live around the restaurant. The roughness of the concrete shell will also function as an artificial reef, welcoming marine life to inhabit it.

Described as a “sunken periscope”, the restaurant’s panoramic window, which measures 11 x 3 m and spans the length of the restaurant wall, offers visitors a magical view of the seabed as it changes throughout the seasons and varying weather conditions. Under has three levels including a foyer and cloakroom, champagne bar and main fine-dining restaurant on the lower floor. It seats 35-40 guests and focuses on high-quality, locally-sourced produce with a special emphasis on sustainability.

“Under is a natural progression of our experimentation with boundaries,” says architect and Snøhetta founder Kjetil Trædal Thorsen. “As a new landmark for Southern Norway, Under proposes unexpected combinations of pronouns and prepositions, and challenges what determines a person’s physical placement in their environment. In this building, you may find yourself under water, over the seabed, between land and sea. This will offer you new perspectives and ways of seeing the world, both beyond and beneath the waterline”.

To find out more, and view other projects, visit Snøhetta’s site.