A radical extension of a 1920s home served as the base of this pioneering artist’s career.

For many, home is not permanent. While we set down roots, it’s often the case that we will move and even move again. But for 64 years, Hannatjie van der Wat has lived in her Saxonwold home on one of the suburb’s quiet, jacaranda-lined streets, and she wouldn’t have it any other way. What is striking about Hannatjie is her strong sense of individuality, which, even at the age of 96, hasn’t been blunted. “You must do what you want to do, not what you think people want you to do,” she asserts. Being authentically Hannatjie was already well-formed when she and her late gynaecologist husband, Doctor JJ van der Wat, embarked on the expansion of their 1920s home.

“Few things really concern me,” she states when asked about the blatant variance in the two sides of the house. An avant-garde extension in every aspect, the new wing was added to the original gable and clay-roofed dwelling to give her growing family room to breathe and, more importantly, to give her a studio of her own. Strikingly modern, and more so when it was added in 1955, the new wing was designed by architect Sidney Abramowitch and channels modernism by way of a daring, linear structure, at roofed and generously glazed along the north and east by floor-to-ceiling sliding doors. “Abramowitch was a brilliant architect. The way he did it was almost as if that was the house next door,” she points to the original structure.

Connected by a long and wide curving passage, the old is reserved for bedrooms and the kitchen while the new wing is dedicated to entertaining, lounging and most importantly, the practice of art. Having trained under Maurice van Essche, it was years before Hannatjie took a step back from raising her three children and returned to painting seriously. 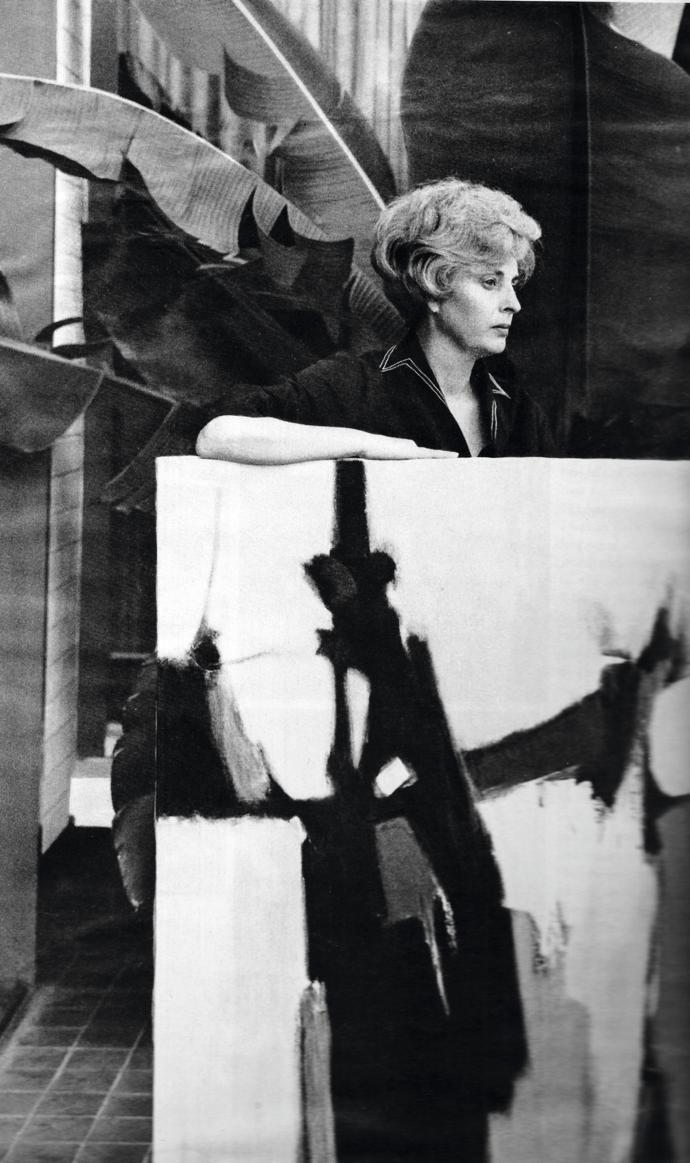 Her studio upstairs is flooded with north and south light and was, until a few years ago, the space where she would feel most at home.“Every artist dreams of having their own studio. Once I had mine, I worked very hard toward exhibitions. When the kids returned home from school I could help with homework, but I never had to leave,” she recalls. Countless paintings of hers ll the walls of the home, indicating the shifts that her style has undergone. As a woman in the mid-20th century practising abstract art, Hannatjie carved a unique path that took her against the current. Her work has always been bold and explores colour and form unapologetically. Her first solo was in 1966 at Adler Fielding Galleries, followed by another in Pretoria just a year later. In 2013, at the age of 90, she had a retrospective at SMAC Gallery.

While her home bears so many of the markers of the time in which it was built – the quarry tiles, panelled ceilings and sunken lounge – it’s in keeping with modern homes of today. It’s open plan and light-filled thanks to generous glazing, and spacious with a great collection of mid-century pieces. Art, mostly her own, brings a shot of colour to each of the rooms. A large canvas stands in the rear of the living room, covered in a wash of green paint, to which Hannatjie still returns every so often to continue at her own pace.