Running until 22 January 2019, the featured work is united by the theme of refraction, understood in optics as the transformation of light by splitting into visible rainbow spectrum or distortion through material such as glass or a prism.

This principle is used by Wim both literally, by applying dichroic filters to glass surfaces throughout the exhibition, and metaphorically, for the transformation and manipulation of canonical artworks and symbols of Afrikaans identity. He shared some insights into Heliostat. 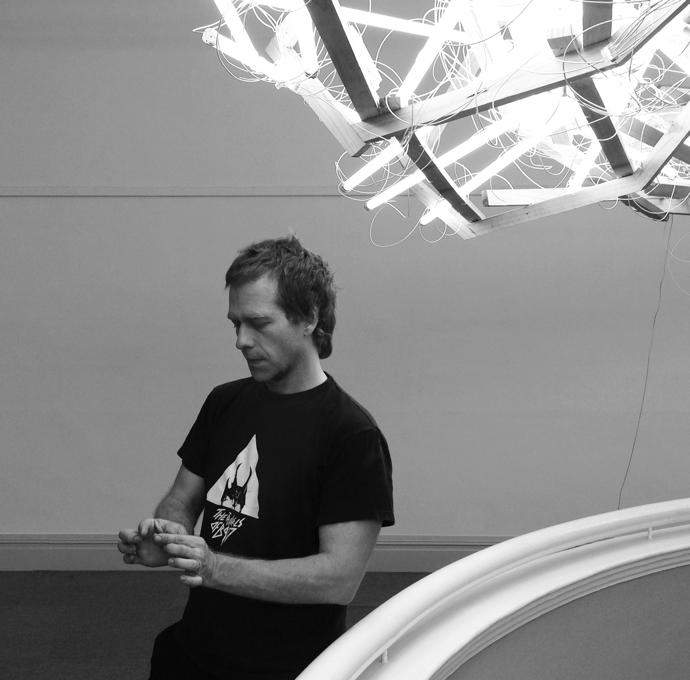 Tell us about the theme refraction and why it’s relevant to your practice.

It is an unusual experience for me, because Heliostat is partially historical, looking back on works that were done in a very different time in the history of the country and when I was in a different place. So it is interesting and complex to reframe those and to see the relationships and contrasts with where I am now and the kind of work I am doing currently.

Things used to be very severe, very finite, very specific, very much conceptually motivated, and complete. In this period encapsulated by the show, I have moved to a much more free and spontaneous way of making work. It still has theoretical and conceptual underpinnings, but the making itself has become free and spontaneous.

I have been really searching for a way to make spontaneous forms that could be contained in a sculpture. And mostly just not to be bored by the work [I’m] about to make before [I’ve] made it because [I] understand it already, I’m trying to find works that I don’t understand; that I don’t know exactly why [or where] the impetus comes from. Without fail it reveals itself and it starts to make sense as time goes by. But what is interesting in that respect, is that the works I’ve been making in this fashion, in this new approach, play together very well with the old works. There are fantastic similarities. And, despite myself, there are lines that trace through all of them that tie them together, so the underlying themes are still there. And I think it’s still me. There is still a certain character, a certain upbringing, present.

A work like commune: suspension of disbelief is complete and encapsulated in and of itself. Does putting it next to the new work in this exhibition reframe it? Or does it draw similarities that you didn’t see happening before? 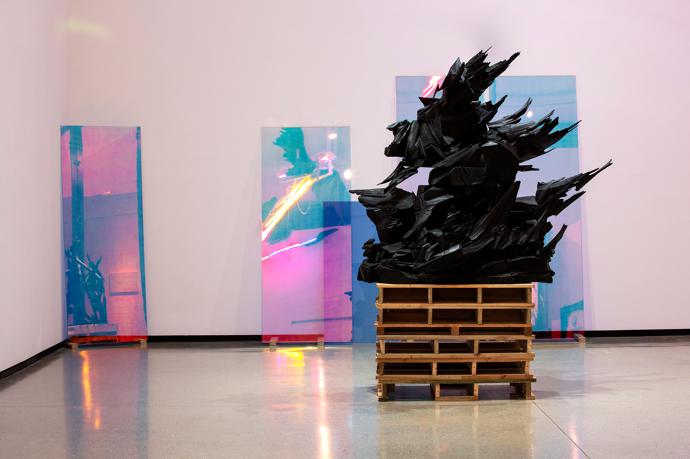 Explain the title for the exhibition, Heliostat, and its significance to you?

Titles are very difficult, and I have an antagonistic relationship to them mostly. Sometimes they present themselves fully formed and you accept [one] because it’s just right. In this instance I wanted something that speaks to a lot of the themes in the works. The older works used to be more socio-political and gradually – and interestingly I am also realising now – [they have] become more cosmological and philosophical: Works that deal with bigger questions, such as what it means to be human and what it means to seemingly be at the mercy of the Gods. Also looking at something being a moment in time, a frozen, snapshot moment.

I discovered recently that a heliostat is a fantastic device used currently in a very high-tech application, but also in the old clockmakers skills, whereby a mechanical device tracks the movement, or the perceived movement, of the sun as the Earth rotates. The object tracks the path of the sun and reflects that light onto a single point and, by moving in sync with the cosmos, it singularly focuses that ever-changing, ever-moving element onto a single idea. It is huge in the sense that you make the sun stand still.

Effectively, a heliostat makes the sun stand still. [It is beautiful to try] to understand the things that shape us, and for a moment to put a spotlight on a single idea. So as a capsule of all the works on this exhibition, not just because they span a certain period of time looking back at it, but many of the works deal with the travails of humans in the face of forces that are bigger than us. There’s the Pieta, and we know the story of that. There’s Lacoön, which is an amazing story. The entire altarpiece is based on images from art history – really potent reminders of humans being at the mercy of forces that are shaping us, which we need to contend with and accept and learn to become in sync with.

So, in the light of that, in the light of all these really big forces, the idea of having a moment where you can make the sun stand still is quite wonderful. It stands in for some of the frustration and impotence that we can feel in the light of things happening to us and around us. We’ve lived through an enormously long period of peace, or relative peace, on Earth – the longest period of prosperity in the history of humankind. It’s not always going to be like this. And so it is interesting to take a moment and tame the universal forces.

For me it really speaks to what they imply, not to literally what you see. Because of all the refraction of light, and fragmentation of images by means of varying reflections that’s happening in the show, because of that optical effect, I felt a title that alludes to something more than just what you will encounter visually anyway, is necessary. Otherwise it is too easy to understand; it’s too literal. I think we really have to be skeptical and disciplined [about whether] things make sense. It does not mean that it’s wrong, but it really should cause you to just enquire.

Visit Heliostat: Wim Botha until 22 January 2019, in Gallery 2-8 at the Norval Foundation. Take a tour with VISI inside this beautiful art museum here.