There’s an oversupply of architecture in South Africa that’s more concerned with what is on the surface than how well the space functions and how it relates to its surroundings. Overly worked and too often themed, it presents the “dream” of living in a certain typecast style by way of gratuitous, decorative frills. This is especially prevalent in large-scale developments, where quality of life ends up coming second to feature walls and on-trend design elements that lack connection to their context.

When Johan Wentzel and Grete van As of W Design Architecture Studio had the initial discussions for Roundabout Brooklyn with developers KEE Properties, they envisaged an apartment block that would exist in harmony with its surroundings, with a focus on honesty, longevity and above all, liveability. They were also cognisant of inheriting staggering views of many of Pretoria’s most notable sites and planned the layout to make the most of this.

“We want to get back to creating buildings that will still be relevant in 40 years’ time. We’ve lost that; buildings today have short life spans,” says Johan. By distilling the suburban dream (a secure home that lives out towards a garden) and downscaling it, the two have combined the benefits of apartment living with a high-end offering to those seeking a home, rather than a transitional space.

Each apartment faces north and has its own terrace, either generously planted in off-shutter concrete containers or with views into the dense canopy that the designers have created. And all the units are liberally proportioned, ranging from 60m² one-bedrooms, to a 175m² three-bedroom penthouse with its own swimming pool. 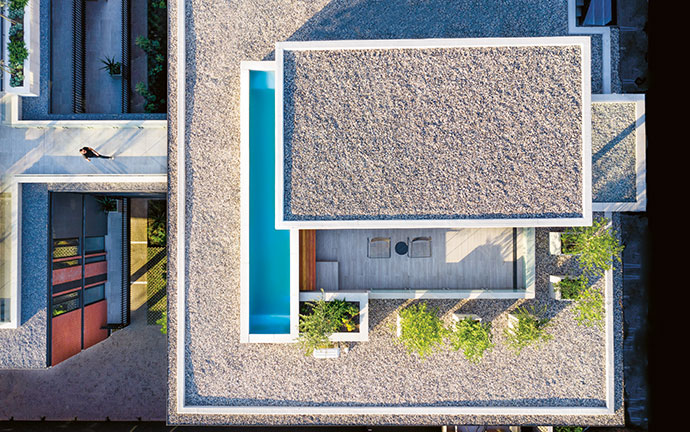 The penthouse has its own rooftop terrace with an eight-metre lap pool offering wide-open views of Pretoria.

Containing just 21 apartments and with a stepped structure, the building is sensitively scaled in response to its neighbours. The street-facing units, where single-storey residential homes exist, are only two storeys high while those behind them – where the building backs onto a shopping centre – rise up to four. “It’s like a multiple adaptor; whatever is happening next to it determines how we develop it,” says Johan of what they’ve unofficially dubbed “the mediator”.

Material honesty is central to the development’s quest for simplicity. Opting for the bare minimum of single-trade and unfinished materials, this is a structure that reveals its parts openly. A quick glance at Roundabout Brooklyn reveals impeccably laid face brick in two shades, combined with unfinished concrete and steel – all of it in arresting precision, like a neat frame whose parts have been seamlessly slotted in. The lack of finishing such as plastering, tiling and painting does away with demanding maintenance, ensuring a shelf life that surpasses current norms.

The building’s clean-lined, contemporary form echoes this notion with a no-fuss aesthetic that emphasises the experience of living in each space: the surplus of natural light, the quality of the finishes and ready access to green spaces are all part of that experience. From the ground level, a row of Harpephyllum caffrum (indigenous wild plum) trees already rises to meet the first floor and will soon offer its apartment dwellers a view into the canopy. Planter boxes of varying sizes are landscaped with succulents and the walls play canvas to tickey creepers that have already started their upward journey. Up on the communal rooftop terrace, the views are spectacular and celebrate all that Pretoria has to offer: dense greenery that follows an undulating landscape.

Rather than overlaying an isolated living concept, the designers’ approach here is both responsive and sensitive, in the hopes of achieving architectural longevity. “As architects, we have the opportunity to do something responsible in our lifetime, instead of putting the onus on future generations,” concludes Johan.