Memorable design will have your looks turning from lingering to lustful at New Orleans’s idiosyncratic Maison de la Luz Hotel.

Ask anyone what it means to reinvent design-hotel luxury for the 2020s, and Kelly Sawdon is best poised to answer. A partner at Atelier Ace – the studio known for its creative work on the global collection of Ace Hotels – Kelly was tasked with converting New Orleans’s 1908-built City Hall annex into what the company considers its first foray into luxury properties. The former office building, with its imposing edifice complete with Beaux-Arts flourishes, reveals little of its now offbeat interior. 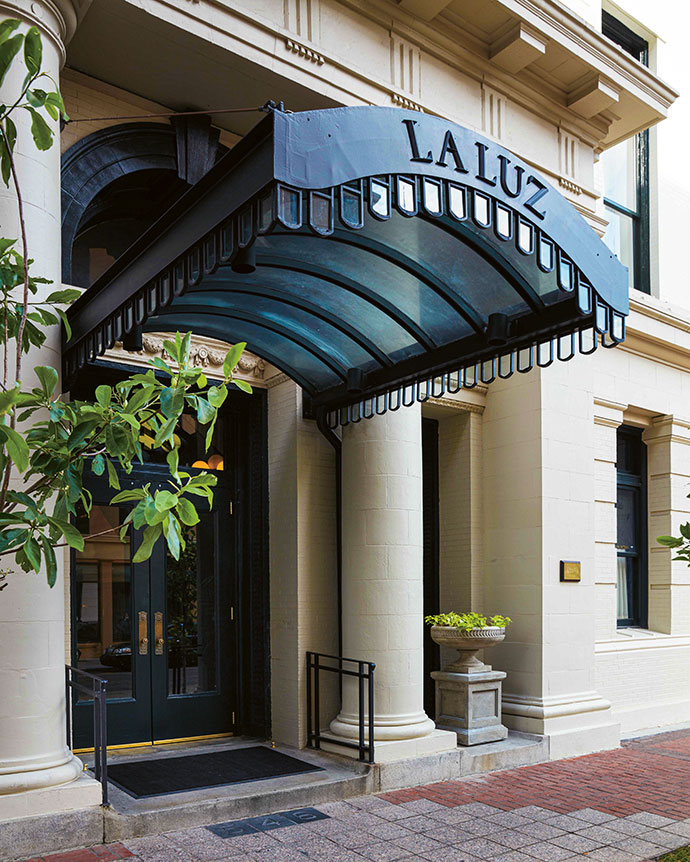 Situated mere metres from the historic Lafayette Square and housed in a former City Hall annex, the hotel’s exterior reveals little of its quirky interiors.

Enlisting the help of Pamela Shamshiri of the brother-sister interiors team behind LA’s Studio Shamshiri multidisciplinary design firm, Kelly set about conceptualising the hotel by questioning contemporary luxury. “New Orleans is such a complicated, beautiful and layered city; we wanted to do something that really celebrates that on a more human scale,” she says.

“We asked a lot of questions about what luxury is right now, and what the Ace version of that is,” adds Pamela, citing nonagenarian style icon Iris Apfel as an influence on the maximalist aesthetic. Intimacy, a strong sense of place and New Orleans’s multicultural heritage were key to the look.

The outcome is a hotel that’s reminiscent of a worldly collector-traveller’s townhouse. “It’s almost like a quirky residence; there are aspects of it that really, truly do feel like a home,” says Pamela.

Maison de la Luz is nothing short of audacious, and a welcome assault on the senses. The Art Deco lobby makes for a cinematic entrance, one that’s given next-level impact by a chequered floor and Wes Anderson-style concierge desk. Complete with vintage lamps, period fonts and pigeonholes for silk-tasselled key fobs, the desk sets the tone for the guest experience.

So too do the original twin staircases: thoughtfully restored, they anchor the entrance. “We just dusted in the gold,” Pamela says of the colour added to their intricate metalwork to enhance their French detailing. Glass cabinets housing antique-store finds, and framed ceramic snakes forming sailing knots that reference the Mississippi’s maritime endeavours, add personality to the space.

Nothing shouts multicultural quite like an assortment of collectibles, including artworks of ancient Egyptian pharaohs, African masks, festive Indian headwear and torsos referencing Greek antiquity. Their display in the guest lounge has a fun pick-’n’-mix approach. Positioned at eye level and above, they draw attention upwards, encouraging an appreciation of the grandness of the high-ceilinged space. They are the room’s showstoppers, and are paired with understated velvet armchairs and banquettes in a playful, jewel-toned palette.

Completing the scheme are colourful custom carpets created in partnership with Christopher Farr and depicting menacing wild animals. Pamela describes the space as madcap, and one that deliberately references global iconography, thereby acknowledging the city’s diverse past. 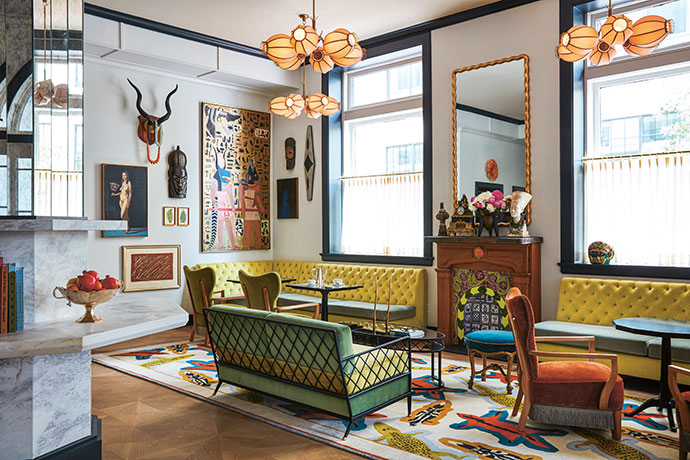 For Pamela, the challenge was to make the once formal room feel like a corner of a collector-traveller’s grand home. Floor-to-ceiling art – mostly Egyptian, Indian and African collectibles, along with rebirth iconography such as snakes and eggs – draws the eye upwards and enhances the residential feel.

The breakfast room offers a dramatic change of mood from the hotel’s other public areas, its airy freshness a contrast to the prevailing drama. Here Pamela celebrates the outdoors, despite it being a space that largely shuts out views of the neighbourhood beyond. Visuals of overscaled botanicals in Delft blue, and taking the form of leafy foliage fussed over by bees, grace the white walls. Wicker chairs surround scalloped dining tables. These, and the trompe l’oeil forms of the striped tent-like ceiling, conjure the decorative trimmings of a Louisiana garden party.

“New Orleans is a town of pirates and ghosts, and when you walk around, you’re very aware of different spiritual influences,” says Pamela. The private salon speaks to this, and is as rich in mysticism and Southern darkness as the town of Savannah is in John Berendt’s Midnight In The Garden Of Good And Evil. Saturated in night-time blues and gold, the room’s colours are not its only nod to the skies above: framed celestial maps, astrological charts and vintage diagrams of heavenly eclipses add an erudite edge. The spiritual realm isn’t far from reach, as the room’s fringed stools, studded sofas, alabaster urns and dimmed sconces intentionally lend the space an occult mood fit for a séance…