After five decades in the UK, screenwriter Shawn Slovo decided to return to live in the country of her birth. She built her home eco-consciously, both in the choice of materials and in the manner of its construction.

In 1964, when I was 14 years old, my family was forced into exile. For most of his life my father, Joe Slovo, lived under the shadow of imprisonment and assassination. In 1982, my mother, Ruth First, was murdered by agents acting on behalf of the apartheid regime. Not surprisingly, I have ambivalent and complicated feelings about the country of my birth. Though I am grateful for the advantages of growing up and being educated in the UK, the sense of loss I have always felt, and the longing to be back under African skies, never went away. It is no coincidence that two of the films I have scripted are set in South Africa. When my citizenship was restored in 2005, and after 54 years away, I started to think seriously about returning.

Initially, I got seduced and waylaid by the Cape, but it never felt like home. At first sight, coming from the urban blight that is London, Monaghan Farm took my breath away. Located near the Cradle of Humankind, the world’s richest early-hominid site, the very earth reverberates with its ancient history. In a world where the future of our planet hangs in the balance, the eco principles and ideals behind Monaghan Farm’s establishment sealed the deal.

From our first meeting – facilitated by my friend Anna Claude Bailey, whose input was invaluable throughout the process – architect Carl Jacobsz and I were on the same page. We share the same aesthetic ideal: simplicity, functionality, interior spaces that make the most of the specifics of the location. His practice has a track record of using recycled building materials and structural elements. I am so gratified by the fact that almost 100% of the materials – the steel, the glass, the wood, the stone – can be disassembled and reused.

Carl decided to “float” the house to maximise the views and because there was an existing house in front of the property – no point looking into walls if you can be looking at sky and mountains. What is lovely here, and so unlike England, is that it’s not a landscape of walls, fences and gates. The entrance is quite open and leads you directly through into the courtyard, from where you enter the house. Through the glass doors and high windows, the landscape, back to its natural state, is reflected from all sides. The custom-designed moveable walls of slatted timber can be opened or closed for privacy and security. The second bedroom suite is separated from the main house by a courtyard; whoever is staying there can have the same level of privacy as I do. The writer’s box, with views of the east valley, suspended and floating in the air, is my centre of operations – the mothership as I call it – and is a place of calm and inspiration. 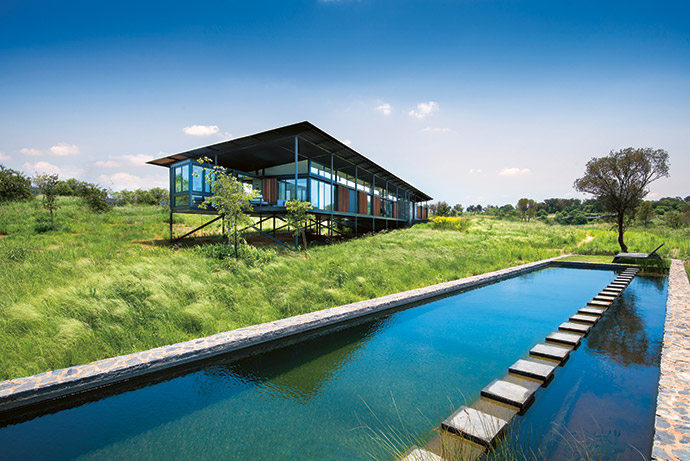 The steel structure of the house is anchored in the ground by heavy stone on the western side and becomes lighter towards the east as it starts to float. The mono-pitched roof catches run-off, which is used to water the garden and fill the eco pool and pond.

During the two-year build I was based in the UK. These days, as long as there is mutual trust and good communication, it doesn’t make a whole lot of difference if the homeowner is on site or not. For me it was a pretty stress-free experience, thanks to Carl and his team, construction manager Conway McCreanor, the engineer, the steel and the glass contractors, the kitchen and joinery designer, the landscapers, and the workers on the ground.

At the end of 2018, I packed up my London house and my cats and dog and made the transition. After a lifetime away, I have come home.