A loft in the Joburg CBD is a repository for a consummate curator’s story-filled collection.

The word “collector” can sometimes call to mind an oddball obsessively sourcing and hoarding bits and bobs, treasure only they fully appreciate. For Fergus Armstrong, stylist, creative and perennial insider to the local design scene, editing has become a skill and career, and the distinction between eccentric magpie and seasoned curator is clear.

Fergus, who works for La Grange Interiors, has a CV that lists a host of premium design brands. He was the decor editor at Style magazine, and has been a stylist for countless others. His obvious knack for merchandising and arranging things to display both the space and its contents optimally is obvious in his home.

The two-bedroom loft is in a new residential development, The Exchange, an exciting mix of urban regeneration and historic landmark in New Braamfontein. Much like the pieces that Fergus has gathered over the decades – “If you buy something you truly love, it’ll always hold value to you,” he says – the property on which The Exchange is situated has a rich past: It was once the site of the Johannesburg Post Office, a vital communications hub for the residents of Vrededorp, colloquially known as Fietas. Here, they could use the telephone, since there weren’t many in homes during that time, and collect parcels. Prior to the area’s rezoning as a white neighbourhood in the 1970s, it was a lively meeting place for residents of colour from diverse backgrounds.

The Exchange is one of three developments on the site that will make up the Braamfontein Lifestyle Living Precinct, developed by Enate Properties. “I bought here so my cat Plato could go out onto the green belt,” says Fergus, referring to his Bengal, a feline of staggering beauty. The area running along the east of The Exchange and shouldering Fergus’ apartment is still under development. It will become a 350 m-long landscaped green belt with indigenous plants and outdoor gym equipment. It’s backed by a row of bluegums that have supplied funeral-goers at the neighbouring Braamfontein Cemetery with wreaths for decades. 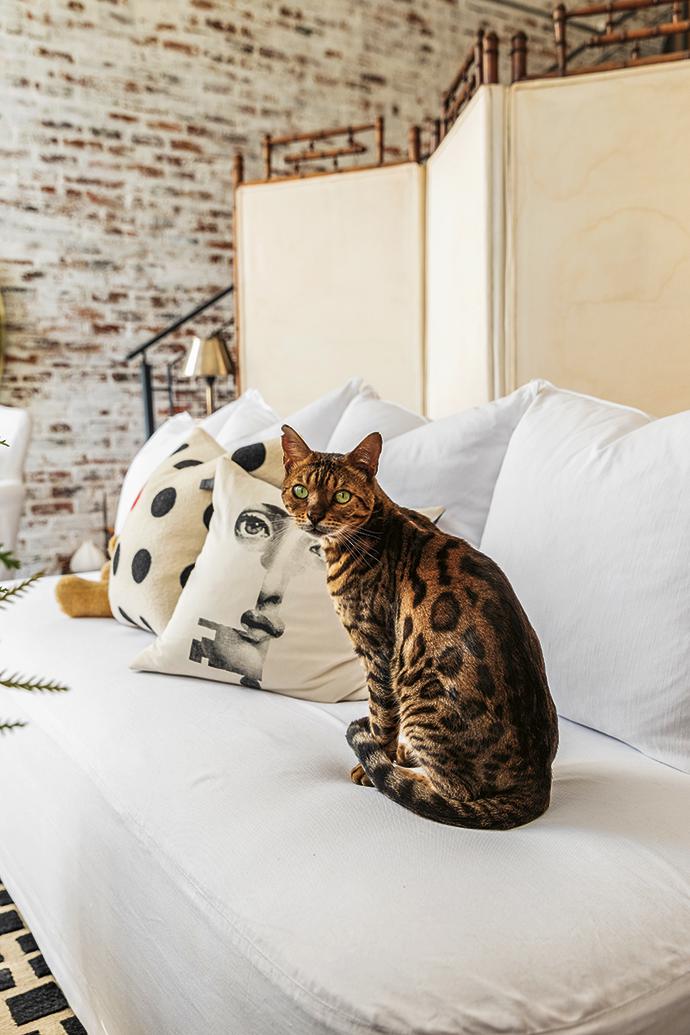 “I love the volume of the space and its industrial nature – though doing anything to the ceilings, such as painting them, has proven a challenge,” Fergus says of the 6 m-high ceiling, which allows the light from the expansive north-facing steel windows to be amplified.

Paint-technique specialist Mary Edwards applied a white coat to the brick walls and then paint stripper for a distressed look. Against this backdrop, Fergus’s assemblage of possessions brings a timeless quality to the interior. The eclectic space tells a thousand stories. A series of framed mounted-butterfly collections was uncovered in two dilapidated old drawers in a Melville junk shop; a scarab beetle in another frame was a gift from his sister Amanda, who brought it back from Deyrolle in Paris. Fergus motions to a framed architect’s sketch under the stairs – “When my grandfather was liberated in Austria at the end of the war, he picked that up in an old palace.

“I find it very exciting to live here; it has great energy. I hear the call to prayer, the trains going by and the birds… There’s a resident Egyptian goose that Plato has already had a run-in with,” Fergus muses. As if on cue, Plato, who has been missing in action, can be heard from the green belt mewling stridently from a distance to announce his arrival.