Christopher MacClements, a Design Indaba 2020 Emerging Creative, is an architect by day and an artist by night, from illustrations and graffiti to printmaking. 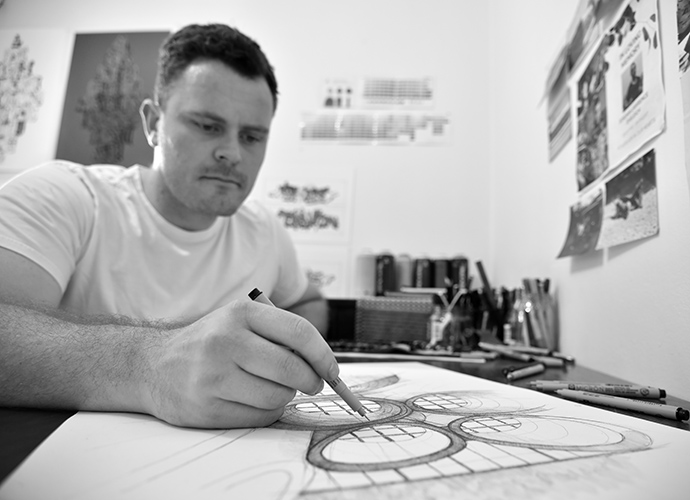 We caught up with him to find out more about his architectural drawings, what inspires him and what it was like being an Emerging Creative at this year’s Design Indaba.

Where did your relationship with art, and architecture specifically, begin?

I grew up with a grandfather who is still practicing as an architect today. I would spend countless hours and late nights working alongside him during both my childhood and architectural studies. His creative influence not only inspired me artistically and architecturally, as all of his works were done by hand, but also instilled in me an ethos of discipline, drive and professionalism when it comes to the arts and architecture. This relationship with architecture was birthed by his creative input and teaching.

From an artistic standpoint, I never formally studied art at school but drew (excuse the pun) learning and creative influence from graffiti (the biggest driver), illustration, film, animation, motion and graphic design, industrial design, and the like.

Your body of work is quite varied, from graffiti to illustration. Do you have a preferred medium?

My sphere of creative influence is multifaceted and convoluted, so it really is difficult to say which medium I prefer. I would say from my current works it’s evident that spray cans, markers and ink (pens) are mostly used. I’m hoping in the future to break away from that and start experimenting with other media to diversify my artistic range and palette. It’s important to me as an artist to always strive to build my artistic repertoire – it’s just more exciting that way.

The spray can allows me to work on larger pieces at a much quicker rate, while the pen allows me to focus on smaller, more intricate works. Both are equally responsive to my creative mood.

Do you have a favourite piece of architecture?

I can’t pinpoint an exact piece of architecture that I favour, but I do have a group of architects who inspire me, namely Zaha Hadid, Thom Mayne, Renzo Piano and Tom Kundig. These particular architects inspire me because their works are not only architectural but sculptural and ingrained in experimentation too.

What inspires your architectural vision?

I believe collaborative and multidisciplinary individuals inspire me the most. Aside from architects, I am inspired by those who are pushing a strong creative and collaborative agenda in their respective fields and by works that are conceptually strong and motivated by execution; I love seeing art manifest itself through precision, detail, layering, experimentation and execution. I am also inspired most creatively in well-lit and airy environments when it comes to studio works. From a graffiti standpoint, I draw inspiration from everywhere and anywhere.

Describe the space in which you are most creative.

I am most engaged and in creative flow while alone with my headphones on – no distractions – just me and the work. I am also the happiest there. It’s a direct route between my mind and the works, almost a translation from unconscious to conscious. 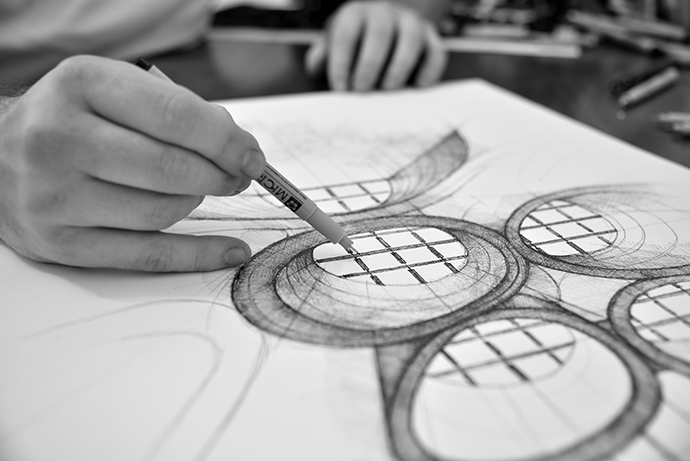 If you could collaborate with any architect, who would it be and what would you create?

It would be Thom Mayne or Zaha Hadid. I would want to create some sort of architectural/contemporary-art installation that would push both architectural and artistic boundaries, blurring the lines between art, engineering and architecture. Something similar to what Studio Drift do.

What was it like being featured as an Emerging Creative at Design Indaba this year?

It was an incredibly humbling experience. The Emerging Creatives class were not only a force to be reckoned with from a design standpoint, but were all individually wonderful people who shared the same sentiments as I do regarding collaboration and hard work. The immense level of talent and passion on display was palpable. Added, the lectures and guest speakers were also something that really inspired me. I walked away from the Design Indaba with my heart full and creative hopes high; an emotionally-charged and rewarding week indeed.

Where can people purchase your prints?

People can purchase originals and limited-edition prints, or commission me, via my website: macclements.com.

I am currently in the process of building two bodies of works for exhibition. The first is a 26-piece alphabet and abstract geometric series that will build on traditional letters fused with abstracted geometries. The second is Late Night Sketch Tales iii which is a follow up to Late Night Sketch Tales i & ii – two solo, architectural, hand-styled exhibitions I hosted at Ground Art Caffe in De Waterkant, Cape Town.

Further than that, I am focusing on my graffiti and mural commission work and building a larger body of works, while experimenting with a few alternative mediums. I am also branching out into print-making and want to experiment with that.