With a bushveld backyard and the bustling Pretoria skyline as its backdrop, this ultramodern family home balances setting and structure with elegant simplicity.

Ever since they were a newlywed couple, Albert and Adéle Nieuwenhuys had been dreaming up a vision for their perfect home – a space with a sense of openness enveloped in raw concrete, steel and glass with generous expanses of double volume. 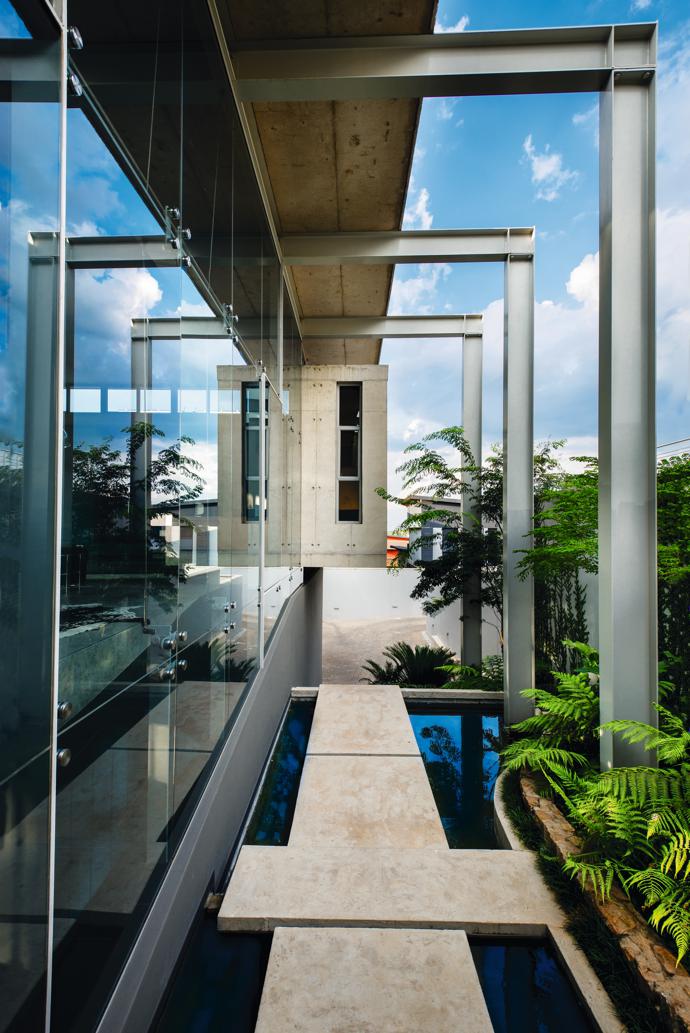 The frameless spider glass curtain wall blurs the edges between inside and outside as one approaches the entrance, by casting reflections of the tranquility pond and garden onto the interior.

They found the perfect site in the heart of Pretoria – the first step to realising their dream – with the most incredible views across the Faerie Glen Nature Reserve. But it wasn’t until they met with architect André Eksteen from Earthworld Architects that they knew their vision would finally become reality. “At Earthworld Architects we believe that the architect’s primary role is that of mediator between people and the landscape they live in,” says André. “We were therefore incredibly excited by the owners’ challenging brief for this unique site, because we knew from the start it would require pushing creative boundaries.”

True to his word, the main design concept for the house is a complete contradiction in terms. “I wanted to preserve the site’s intimate connection with the nature reserve by designing the house as an airy, lightweight shelter that simply floats over the indigenous landscape – with the structure being nothing more than a protective shell that can adapt from day to day according to the needs of the family,” André explains.

Even though concrete is usually perceived as a heavy, solid structure, the series of slim, interlocking concrete boxes seem to glide weightlessly over the earth. As one steps across a floating concrete bridge to approach the front door, it is evident that the central design theme of lightness and openness is carried throughout the entire house. The glazed curtain walls all move and open up, allowing inside space to become a seamless part of the outdoors. “Because the site is not very big, I wanted the exterior spaces to become additional living rooms – activating the entire site as dwelling space,” André explains.

Apart from satisfying the aesthetic senses, the dramatic double-volume spaces with high-level clerestory windows and deep overhangs have an important function. The house’s main façade faces west to maximise the views, requiring the design team to perform extensive sun and climate control studies to get the shading of the house right. Inside, there is interconnectedness between the multiple level spaces, accentuated by the natural beauty of concrete, steel, glass and oak. The crisp and clean-cut interior style combines raw, textured and flamed finishes to provide sensual variety.

Adéle’s favourite place is the kitchen:“I love the sleek industrial lines, but mostly it’s being part of everything else that’s going on in the house – whether it’s the boys playing in the pool, the game that’s on in the living room or the occasional zebra walking past,” she laughs. Finding balance between complexity and simplicity, architectural mastery and family homecoming, it comes as no surprise that the house received a South African Institute of Architects award in 2017.