You’d be forgiven for misinterpreting the austere facade of this multilayered minimalist family home in Bischopscourt as cold. But the minute you set foot through the entrance into the voluminous heart of the home – with uninterrupted views of the mountains ahead and natural light streaming in from every angle through the floor-to-ceiling windows – it all makes complete sense.

Homeowner Angie Diggle’s brief to architect Luis F Mira saw her love of Georgian architecture, and obsession with classicism and ratios woven into Luis’s minimalistic design approach and unwavering perfectionism. “The final considerations were to create a seamless flow from one space to another, ensure that the views were maximised from every room, and strip back everything,” explains Luis.

It was a serendipitous chain of events that led Angie and Luis to meet. Having purchased the sprawling Bishopscourt property with her husband, Martin, on somewhat of a whim, Angie immediately began the search for an architect to bring her vision to life. “I discovered Luis’s work in an international architectural magazine, and I realised instantly that he was perfect for the project,” says Angie. “I knew I needed to find him immediately.”

At the time, Angie was none the wiser that Luis, who hails from Chile, had opened a studio in Cape Town in 2009. The universe conspired, and then delivered. The result? A stripped-down, multilayered monolithic masterpiece in the middle of the suburbs – and a dynamic duo in Angie and Luis.

Before work began on the construction of the house, the property’s foundation had to be raised, “to create the feeling that the house is an extension of the mountain and vice versa”, explains Luis – a mammoth project in itself. “Martin and Angie also made the brave decision to move the house 12 degrees from its original north-facing position to be more west-facing. It was risky, due to the elements, but it definitely paid off.”

Another key member of Angie’s team was landscaper Danie Steenkamp of DDS Projects in Stellenbosch, acclaimed for his dynamic, eco-friendly aesthetic, who gave the garden an overhaul. “Danie implemented a perfectly African garden in Bishopscourt, which is just what I wanted,” says Angie. “We hand-picked every acacia with him, and waited patiently for the restio grass to grow in the farmlands before being replanted here.” 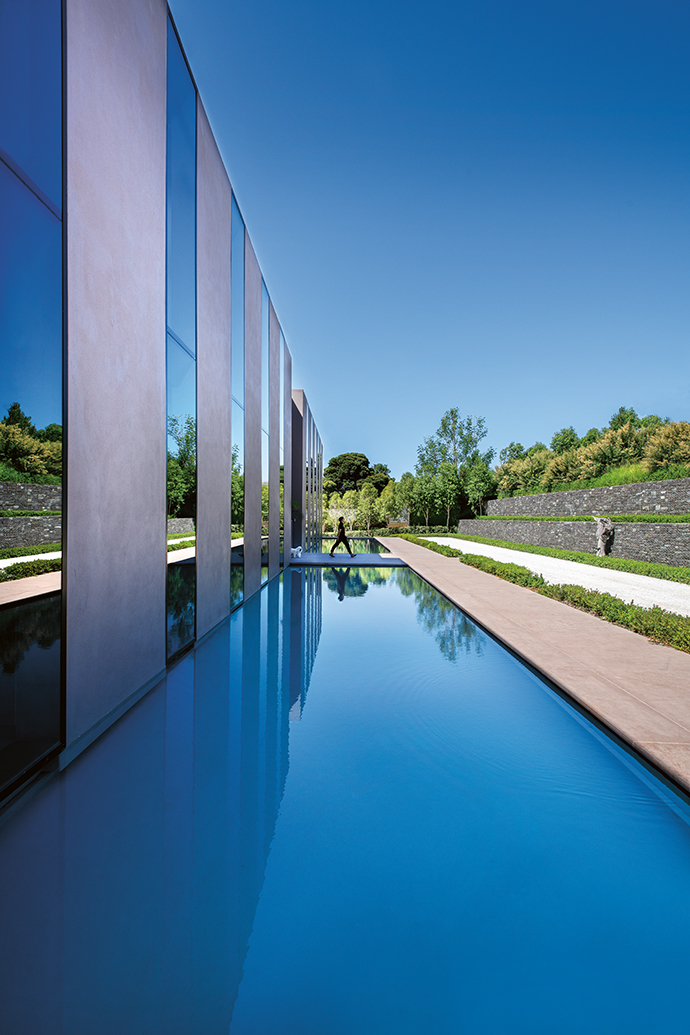 The capacious six-bedroom home certainly lives up to its owners’ desire for uninterrupted indoor-outdoor living. And, thanks to Luis, it has also been cleverly imagined to incorporate surprising elements such as the below-ground squash court, hammam and jacuzzi, guest suite, wine cellar and smartly concealed home office.

Every component – both outdoors and in – was meticulously considered by Angie herself, from the ancient limestone sourced in Dholpur in Rajasthan and the statement-making onyx slab that forms the backsplash of the master shower, to each copper-plated handle and hinge found throughout the home.

The impressive collection of art got similar attention, and includes a Nelson Makamo triptych and a Peter Eaton Gurnz Perspex installation, all adding definitive points of interest that complete the otherwise bare interiors.

“The ultimate goal was to create a beautiful backdrop for everyday life, almost imitating a photographic studio. Everything is open; everything flows seamlessly and provides no room to hide,” Angie clarifies. “The action within these spaces becomes the most important. There is no interruption to what is ultimately life’s action: family, friends, pets and nature, living and loving harmoniously.”