Twenty-six-year-old Heidi Fourie graduated with a BA in Fine Arts from the University of Pretoria in 2012. We decided to chat to this talented young artist about her artistic journey, creativity and what we can expect from her solo exhibition in Cape Town.

How would you describe your work?

My subjects are most importantly skeletons for a network of marks. If I accidentally create an interesting mark, it has to be left as is.

What do you find most rewarding about creating?

The most rewarding thing about creating is the rare moment where you surprise yourself, where the will of the medium exceeds your own and something unexpected appears in the image. I also find the physical feeling of the paint as it moves beneath my brush or as I smear it onto the surface with my palette knife, quite satisfying.

What has been the highlight of your artistic journey so far?

The highlight of my relatively short artistic journey so far was probably Turbine Art Fair earlier this year. I have never before received such positive response and amount of interest. As it was a preview of my upcoming solo, it gave me the much-needed boost to create the rest of the work for the solo with vigour.

Which work are you most excited about at your latest solo exhibition at Salon Ninety One? 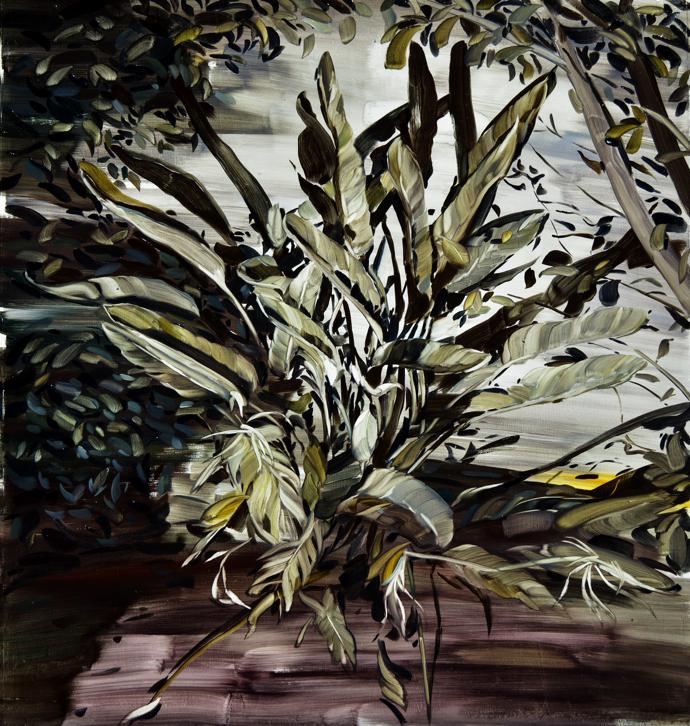 Serpentine Lines, above, is not necessarily my favourite, but it definitely sparks the most excitement. It was the last one I painted and I felt a great sense of ease and flow while creating it, probably because I have been painting intensively for a long period of time and it always takes a while to get paint-fit. This one was the sprint at the end of the marathon and I was sad to have to finish, as I felt I finally got in the groove. I am thus already excited about coming back and working on the next exhibition.

Tell us more about your animated paintings. What do you love about making these?

The End is the Beginning is the End

I haven’t done an animation in a while, as it can be quite time consuming and time was a scarce commodity this year. I do miss doing them. I like the idea of a painting that moves. The accidents and anomalies that occur in the painting process become very apparent when two almost identical paintings show in succession. I prefer to work on each frame separately as opposed to altering the same image as the whole surface moves and vibrates and not just a specific part. Animated GIFs are a very exciting – and perhaps underrated – medium for me. The repetition is hypnotic and mesmerising. It is also an internet-based medium, which corresponds with my conceptual agenda, as I explore both virtual and physical spaces for subject matter.

If you could collaborate with one South African artist, who would it be, and why?

I know it sounds too realistic but I want to do a proper collaboration with my partner, Allen Laing. We have had a two-man exhibition but it was still two separate bodies of work. I would love to create a series of paintings of him wearing his wearable pseudo-functional sculptures, perhaps in a natural setting.

What’s next for Heidi Fourie?

I don’t want to say too much about this yet but my next solo exhibition is already less than a year away. I want to designate enough time for that one to be able to experiment with perhaps an added level of abstraction. Apart from that I look forward to Cape Town Art Fair with Salon91 and perhaps a short residency in Namibia early next year. I am hoping to do some long overdue travelling abroad at the end of 2017.