eThekwini Municipality’s award-winning museum is the first new museum to be built in Durban in 100 years and also the first public cultural building constructed in the Cato Manor area.

The uMkhumbane Cultural and Heritage Museum was chosen as the Overall Winner of the Africa Architecture Awards 2017. (Read about the inaugural awards here.) The museum has not only transformed a once polluted riverbank and dumpsite into a world-class facility, but also created a space to preserve Cato Manor’s rich history and simultaneously stimulate innovation and the local economy.

Architects Rod Choromanski and Dean Ramlal of Choromanski Architects won the eThekwini Municipality Architecture Department’s public design competition in 2003, after the city’s Local History Museum team identified Cato Manor as the ideal location for a new museum. “There are many voices from Cato Manor dating back to early Iron Age settlements to which this project provides a platform for expression,” says Choromanski.

The five-storey, red-brick museum tower will be used to document the socio-political history of Cato Manor, cultural traditions and history of the Zulu Nation, as well as offering a venue for educational and recreational events. The tower reduces the museum’s footprint and frees up the site for a park and future built phases. The inner skeleton is concrete while the outer skin is clay. Various materials were investigated before confirming clay brick from Corobrik as the final cladding. 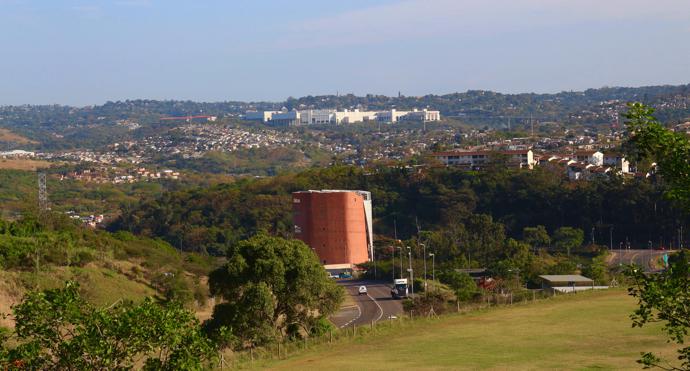 Approximately 500 000 “Firelight Satin” bricks shape the tower. Because of bricks’ inherent strength, it was possible to achieve higher walls and avoid extra reinforced concrete beams. Openings in the wall deliver dappled light and ventilation, and some even serve as bird nesting boxes.

The brickwork establishes a strong, homogenous, sculptural, curvilinear form that contrasts the machined process of the aluminum atrium screen, and ensured local artisans were involved in the construction of the building. In order to deal with the challenges of the building’s form, the Architecture Department involved on-site accredited training of the bricklayers.

The museum sits alongside the crypt of Queen Thomozile Jezangani kaNdwandwe (Mother of the King Goodwill Zwelithini). The city’s long-term plan for the uMkhumbane project site is for a cultural park and public neighbourhood square, further retail spaces for traders and craft stalls, and facilities for children.

Read about what Design Indaba had to say about the museum here.