Architecture firm Local Studio’s pioneering approach to redeveloping downtown Joburg has come to the historic suburb of Mayfair, with a striking school designed for a close-knit community.

The historic suburb of Mayfair, west of the Johannesburg CBD, has recently become home to a beautifully designed educational sanctuary for the children of Slovo Park, the suburb’s embattled informal settlement.

The area is known for high levels of crime and poor basic services, so the Salvazione School – designed by pioneering inner-city architects Local Studio – is a ray of light for the community, and a visual burst of much-needed colour and fun. 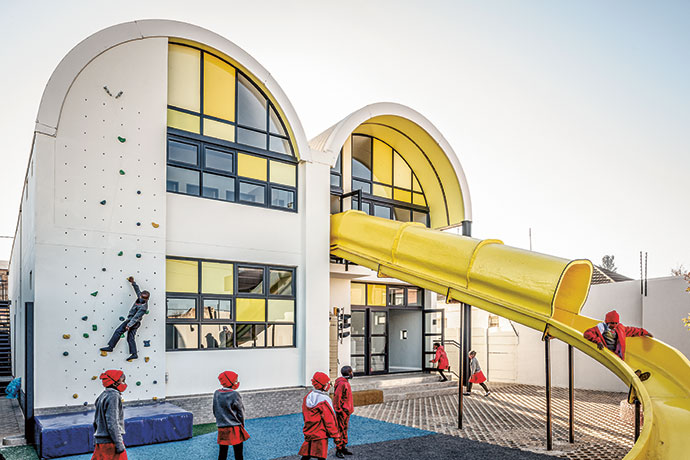 The yellow slide is the building’s most attention-grabbing feature.

The project is not terribly concerned with a strategy of connecting new architecture to the rest of the suburb’s heritage-grade buildings. Rather, Salvazione School’s double-storey structure, double-vaulted zinc roofs and colourful, Mondrian-esque façade demand Mayfair’s attention. This way of working is part of Local Studio’s approach to creating architectural solutions in neglected areas: the strategy is to make a bold statement that “announces” to a place that change is on the horizon.

“The school had to be noticed to be taken seriously,” says Local Studio founder Thomas Chapman. “We set out to create something striking to support the programme, and to make it known that there is something going on here, among these typically unkind environments. We believe the projects should stand out in these sorts of areas. Essentially, the building is four main classrooms and ablutions, so it really could’ve been something quite boring. But we wanted the area to know that something good was coming.”

The building’s striking features are quickly outdone by its most attention-grabbing element: a sunshine-yellow slide that emerges from its upper level, on which you can slide straight down into the schoolyard. And the focus on play continues on the rear façade, which has been turned into a climbing wall for break-time fun. “We wanted to create a magical place for kids, for whom this could become an escape,” says Thomas.

The project came about through the philanthropic outreach of the Italtile and Ceramic Foundation, which, Thomas says, has been working across the country to uplift communities. “We do a lot of work for CTM and Italtile – big building-supplies companies that have an amazing foundation that donates millions a year to recreational and educational projects in rural areas.”

Rural projects are quickly becoming part of Local Studio’s language too. Despite being celebrated around the globe for their remarkable interventions in the fabric of downtown Joburg – such as the game-changing Hillbrow Counselling Centre – the firm is extending the philosophies applied in their urban developments to the rest of the country. Today, more than a third of Local Studio’s work is rolling out in rural environments – and it’s also become the focus of Thomas’s academic work.

“We had been hired to look at these projects because of our urban experience,” Thomas says. “Now we are focusing on the craft of architecture again, with clients who are giving us free rein, so we are beginning to apply principles that we would use in low-cost housing, to more high-budget projects. The work has been informing my PhD, in which I’m exploring new ways of defining public spaces by looking at models from rural areas.”

As can be seen in Mayfair’s Salvazione School, this is the start of a new era for the Local Studio group, as well as for the communities they work with, as they aim to forge humane local architecture that puts people first.