A retired Port Elizabeth couple sold their 1940s home at the top of their property and bravely built a modern, eco-friendly treetop hideaway in the city. 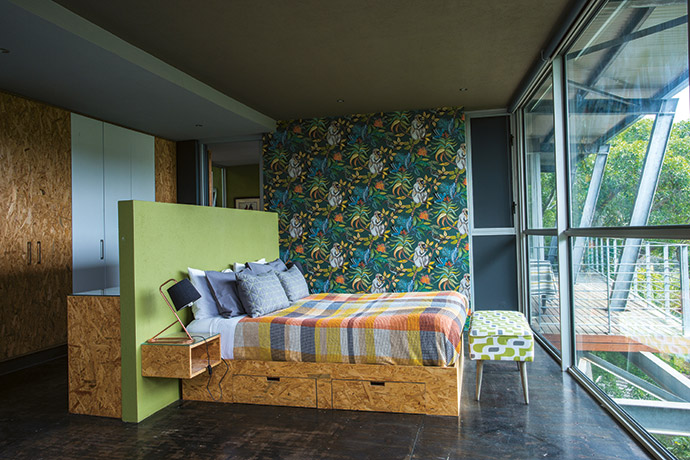 The built-in bed is made of oriented strand board (OSB), a type of engineered wood that is cost-effective and environmentally friendly. Ardmore wallpaper adds a playful touch.

When Fiona and John Whitfield moved back to the Port Elizabeth suburb of Fiona’s childhood in 2001, they were so smitten with the 1940s house at the top of the property that they scarcely took note of the tantalising treasures below.

They would later explore the tangled River Road garden and discover neglected stone pathways amid the milkwoods and white stinkwoods – evidence of landscaping from when the original property stretched right down to the base of Baakens Valley.

“With thick gloves up to our elbows and gumboots up to our knees, we set about clearing creepers and vines that had snaked their way up the trees and lay knee-deep on the ground,” Fiona remembers.

A decade of clearing later, the Baakens, rich in indigenous plant- and birdlife, now offers the Whitfields an envy-inducing view, with virtually no houses to be seen thanks to their elevated position.

Their steel-and-concrete “tree house” is light years away from its bricks-and-mortar granddad higher up. “Once we realised how much property we had, we got the ball rolling to subdivide it,” Fiona says. But the process took years and interest from buyers proved lukewarm given the gradient and associated costs of building. Fiona and John were also nervous their view from above would be marred and so decided to sell their home and move downhill themselves.

They remembered a promising architectural student named Dal Venables, who’d assisted them with a project a few years before. Dal now had his own successful firm, DMV Architecture, but had never forgotten the Whitfields’ unique if challenging property.

“Dal and Neal [Fisher, who’d joined DMV as a director and senior architect] bravely took on the project,” Fiona says. Briefed to create a one-bedroom home with a guest suite below, they gave the architects carte blanche. “Neal did the design and, because we’d given them a lousy budget [a non-negotiable R1,5 million], also had to project-manage everything.”

The only option, Neal says, was to separate out every trade and get it priced, then manage each service provider and their time on site. A primary structure was made from galvanised steel, and a light-gauge steel-framed “box” – clad inside and out, then filled with concrete containing polystyrene balls for insulation – was slotted into the main frame. Many of the building components were pre-manufactured and assembled on site. One year later, in May 2016, the Whitfields could move in.

“Living here is a privilege,” Fiona says of their low-maintenance home with its lush wild fig canopy. “The birdlife is astonishing, with loeries and a resident African goshawk gliding through the trees along with orioles, paradise flycatchers, guinea-fowl and other birds too numerous to mention. I am chuffed that at this age [Fiona is 63 and John is 64] we are living in such a modern-looking and exciting home.”

The guest suite under the house has become a popular Airbnb rental – with two of the couple’s three sons based out of town, “the boys” have to book if they want to visit. “We have a tent in the garden and they’ve all slept in there at some point!” Fiona says.