In his fourth solo show, world renowned South African ceramic artist Andile Dyalvane pays homage to his ancestors with a large-scale selection of sculptural ceramic seating, premiering at Southern Guild in Cape Town from 10 December 2020 and at Friedman Benda in New York City in June 2021.

iThongo, an isiXhosa term, Andile’s mother tongue, translates to “ancestral dreamscape”, the spiritual passage in which ancestors communicate (uYalezo uLwimi lwabaPhantsi). In an unprecedented symbolic move, Andile’s work, which consists of 18 sculptural stools, chairs and benches, travelled to his native homestead of Ngobazana in rural Eastern Cape, creating a special opportunity for Andile’s family and community to view his work before it is exhibited in galleries.

Hand-moulded from terracotta clay, the seats feature rounded bases that are positioned close to the ground, which is hailed as an ancient portal for ancestral communion. The round bases anchor the sculptural backrests, which in contrast to the low seats, are almost one metre in height.

“My intentions with developing an extended body of work under the title iThongo is to highlight a gathering of dreams, seated in the soul, held by the spirits of our ancestors,” says Andile. “Symbols are visual tools harnessed to impart meanings more effectively within messages – codes, if you will – that aid stories. The language of dreams is symbolic and therefore realised as uyalezo, messages from our ancestral spirits.”

Inspired by rural traditional structures and kraals, the seats are curved and spherical, which in Xhosa spiritual practices, allows for free exchange of energy while maintaining a link to nature. 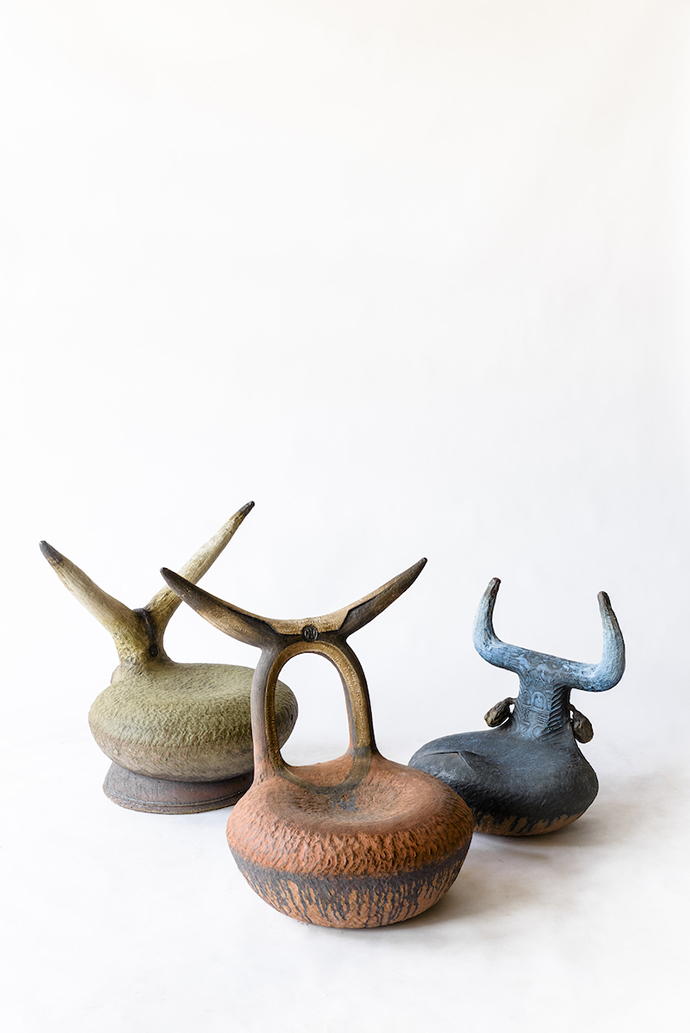 From the outset, Andile’s work has been about preserving traditional Xhosa practices and language, dating back to his first show in 2016 at Friedman Benda. His process is unique, one that sees meaning encoded into the form and aesthetic of each piece. It begins with calligraphic ink drawings or glyphs, which he has used over the years to create his own symbolic dialogue. There are a series of almost 200 symbols derived from words that denote power in Xhosa culture, like entshonalanga (sunset), igubu (drum) and umalusi (herdsman). These words also speak specifically to rural life, as well as universal human concepts. The carved-out forms derived from these symbols are created from and dissolve into the clay surfaces of the sculptures. Everything has a meaning beyond its beauty.

The exhibition will feature a series of interdisciplinary collaborations that Andile initiated with other artists whose work intentionally delves into culture. “Sound healer and musician Nkosenathi Ernie Koela produced an immersive composition combining traditional instruments and sounds created by the artworks; Sisonke Papu, an Umtata-based poet, traditional healer and co-founder of the ISPILI Network in the Eastern Cape, wrote about Dyalvane’s use of symbology for the catalogue; and textile artist Onesimo Bam made a collection of garments hand-painted in indigo dye for him to wear for the ceremonial presentation of his work to his village and to gift to his elders,” says Southern Guild, who is hosting the exhibition in partnership with Friedman Benda.

iThongo will showcase 18 sculptural stools, chairs and benches exhibited in the custom of Xhosa ceremonial gatherings, in a circular arrangement around a fire hearth and herbal offerings – a coming home celebration and a “thank you” to the ancestors who once walked Andile’s home soil.