After launching some years ago to great acclaim, the original prefabricated Zenkaya cabin has found a new home just outside Pretoria. 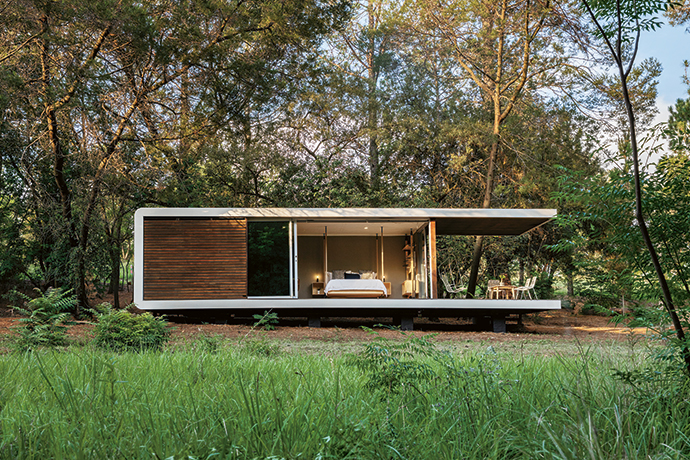 With its boldly graphic shape and wooden cladding and deck, the Zenkaya both stands out from and blends into its new home in a forested hideaway just outside Pretoria.

In 2005, the Zenkaya concept was launched at Decorex JHB and for the first time, design- conscious South Africans were presented with a homegrown modular housing solution that was both innovative and aesthetically pleasing.

After the prefabricated home was featured in VISI 23 (Summer 2005), the response was immediate and, as Peet van Straaten of RAW Studios now remembers it, “viral” in character. “People absolutely loved it” he says.

Architect Eric Bigot had created something special: a structure that could, as that piece in the magazine explained, “function as a holiday home, studio, office, guest room or ‘chalet’”. Combining “zen” for enlightenment and “kaya” to suggest its orientation outwards to the African landscape, the idea behind Zenkaya was that one could simply order a home that arrived fully constructed – and in some iterations, fully furnished, too – on site for quick and easy installation.

Unfortunately, after the initial enthusiasm had subsided, the design somehow never took off on a commercial scale. A prototype ended up at RAW Studios’ production space outside Pretoria, where it remained until Lourens Maritz (of creative agency Mighty Fine) and Peet decided to purchase the unit together. They planned to refurbish it, then move the cabin to a new home at The Greenhouse Café events venue on the capital city’s eastern edge. And that’s precisely what happened, with the freshened-up Zenkaya arriving at its new home, pretty much as originally planned, on the back of a flatbed truck in 2019.

Interiors have been updated using RAW Studios’ innovative range of modular furniture pieces, including a built-in kitchenette, four-poster bed and smart storage, and the team is delighted to have “saved the ideal” of the Zenkaya concept in this way, says Peet. The cabin’s second lease of life is greatly enhanced by its new position within a forested glade on the Greenhouse Café-Rosemary Hill property. 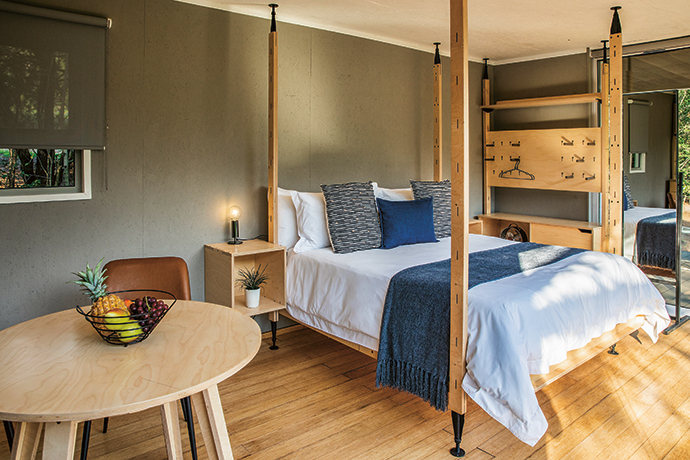 A fresh take on the classic four-poster bed.

Says Peet, clearly pleased with the final result overall, “It’s finally found its spot.” And he’s right – Zenkaya is now living up to its name as the perfect place for a tranquil and private weekend retreat.