Located in a former auto electrician shop that burnt down in August 2015, The Electric came about as the result of a collaborative creative process with a group of people that had similar ideas, with co-owner Janette de Villiers knowing exactly what she wanted to do with the space from the minute she saw it, “right down to the floor stencil.”

“Initially we had sought the expertise of a design company and an architect, both of whom presented something so far removed from our initial vision, that we instead decided to take on the design ourselves,” says Janette. “Drawing on the building’s history was also very integral to the creative process. We wanted it to be as authentic as possible, and didn’t want to try and ‘recondition’ the space or change what is a very original and unspoilt part of our city.” 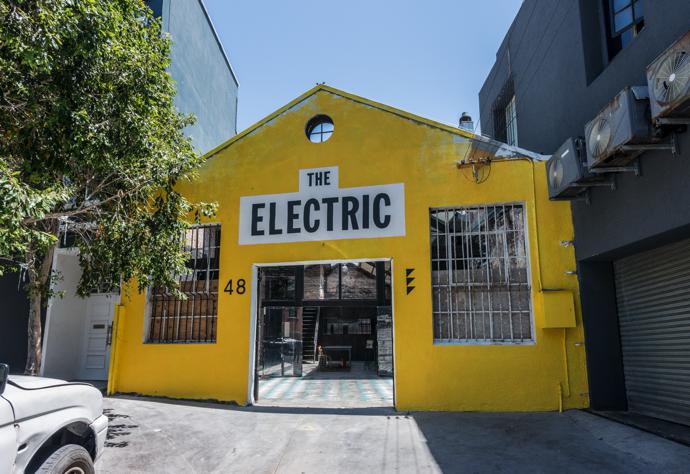 Designing the space became an organic process that continuously evolved. “Ideas developed and took shape as we went along,” says Janette. “The space was enormously challenging – nothing is a straight line – and we literally started with a burnt out shell.  Trying to create any kind of symmetry was extremely difficult but somehow it all just fell into place.”

The design of the space was inspired by the idea of rejuvenation, the existing brick and concrete shell and the surrounding area. The space aims to serve as a multifunctional hub, ideal for hosting pop-ups and events. “Essentially we want it to be an organic and ever-changing space that isn’t defined by set rules or concrete business models and formulas,” says Janette. “And the juice and nut milks are possibly the best in the country!”

The Electric is located at 48 Canterbury Street, Cape Town and is open from 7:30am until 6pm Monday to Friday and from 9am until 2pm on Saturdays. Keep up to date with what’s happening at The Electric on Facebook.