Acclaimed mixed-media artist Pierre Fouché explores gender norms in society through the unique and breathtaking manipulation of lace, needlecraft, rope-work and various other mediums. We went behind the scenes to find out what inspires his original work.

When did your relationship with art begin?

My interest in art was fostered by the crafty women in my family while growing up. I blame my interest in needlecraft (and craft in general) on my aunts and grandmother. Perhaps this interest in craft was also a subtle revolt against the high-art of fashionable conceptualism prevalent during the time of my Fine Art studies in the late ’90s.

You work with many different mediums, but one stands out as an obvious favourite: lace. How did this come about?

There is something very appealing about the idea of working in a medium that is one of humanity’s oldest technologies: twine, rope, thread, nets and canvas. My favourite: bobbin lace, is but one aspect of this broad category of manipulating fibres. It is certainly one of the more sophisticated and technically demanding forms of textiles and, ironically, one of the least useful.

I honed my skills as a lacemaker under the supervision of a very talented local lacemaker and a group of ladies who meet every Friday at a house in Rondebosch, Cape Town. The organic way in which one gets exposed to new techniques and styles in an informal manner through craft circles is a surprisingly effective means of acquiring a skill set. I am very lucky to have become acquainted with the Cape Lace Guild.

What intrigues you about lace-work?

The scarcity of examples and practitioners appealed to me initially as an interesting platform to criticise gender norms. The hyper-femininity of traditional lace is a modern viewpoint and one that is slowly and encouragingly eroding again as youth cultures toy with gender ambiguity. Rope-work and nautical knotting, and the male power associated with its practitioners (20th century American and British sailors), combined with the technical similarities between the techniques led me to draw similar conclusions about macrame’s potential to critique gender norms. I find the non-gridded, near chaotic potential of free lace techniques exhilarating as a craftsman; it requires intuition, curiosity, courage. This slow and mindful anarchy is an ideal methodology for the more poetically inclined activist.

Do you have a favourite piece that you’ve created? If so, which one, and why?

My current favourite piece is “The last time you let me do this to you” (2016). This work is a rope-work bondage harness with lace ornamentation and adornments mounted on a wire armature. It was made with five lengths of rope, so it is theoretically reproducible as an actual bondage harness. The title implies a personal narrative of an intimate power struggle, which I leave open ended for the viewer to complete. 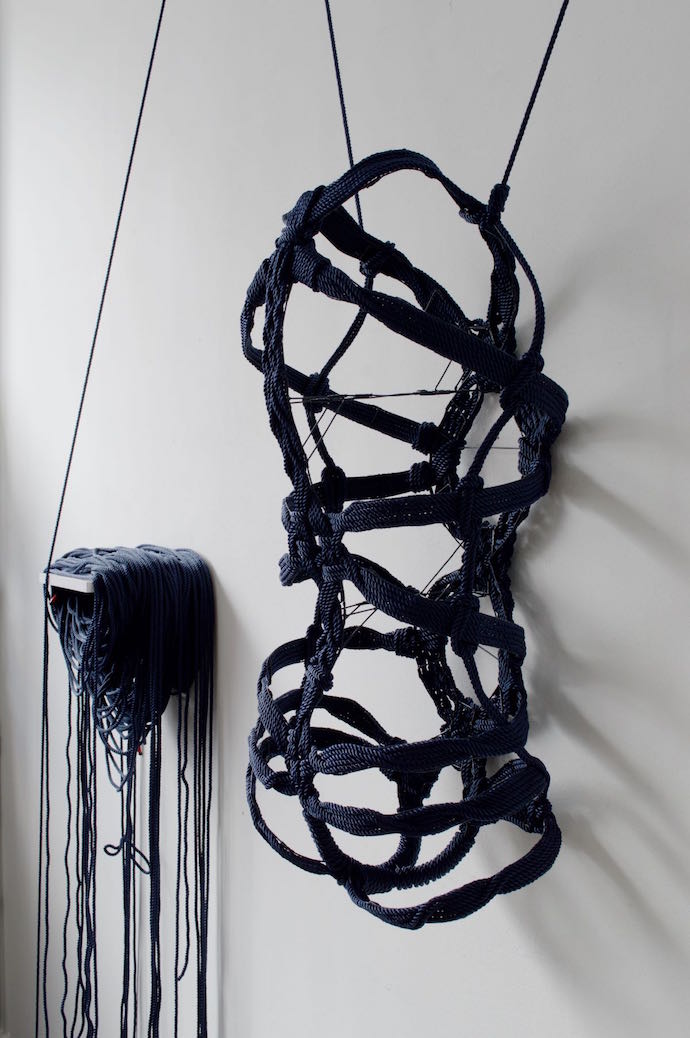 How would you describe your creative process in both the planning and emotional sense?

A battle to the bitter end between the muses and myself! It is terrible to be an artist sometimes! Jokes aside, creativity is like a long-term relationship: it needs hard work, honest and open communication (between your analytical and intuitive selves), as well as lots of playtime.

Are you influenced by any other artists and if so, who?

I am currently inspired by an anonymous 19th century lacemaker. I saw a breathtakingly beautiful piece of Binche lace in Basel in the private collection of an elderly lacemaker whom I was fortunate to have met. It illustrated a peacock motif rendered with such detail and complexity in an inch width of lace that it seemed impossible to have been made by human hands. Those who might have the skill today to attempt such a piece don’t have the courage to even try. That little peacock should be in a museum or a place of worship.

The rope-work harness piece we talked about earlier is currently on exhibition in Michigan in a group show called After The Thrill Is Gone – Fashion, Politics and Culture in Contemporary South African Art (curated by Andrew Hennlich) until 28 October 2016.

I am currently working towards my next solo exhibition at WHATIFTHEWORLD gallery in Cape Town in May 2017 and I’ve just accepted a commission for the most ambitious rope and lace installation I’ve ever attempted, scheduled for completion in 2019.

To view more of Pierre’s amazing work, visit his website.