After Cape Town-based artist Matthew Hindley’s recent exhibition at David Krut Projects (DKP), entitled Survey of Risk, we decided to catch up with him to find out more about what motivated this new body of work and what draws him to the idea of destructive beauty.

How would you describe the body of work featured as part of the Survey of Risk exhibition?

The works in Survey of Risk came about as a way for me to meditate on the images I felt like I was being bombarded with through social media and news that were primarily coming at me through my phone. Disturbing and intriguing, shocking yet numbing. War, violence and destruction, but with a glamorous beauty… My idea was to push pause on the stream, to hold onto one of the fragments that flashes past us every day and to try and unpack, investigate and process it. This body of work is a combination of mediums, including drypoint, monotype and painting.

Why do you think you’re drawn to the theme of destructive beauty in your work?

I was intrigued by the contrast between the extreme beauty and violence in the images we see on the news, in the media and in movies – the excitement, thrill and visual stunningness of massive explosions. I was becoming so numb to the violence behind them and started thinking, ‘Wow, that’s really beautiful!’ I then wondered why I was thinking that way. I was able to explore this question in the works that made up the shows Ruin Lust at Everard Read Johannesburg and Survey of Risk at DKP in Parkwood.

How did the collaboration with David Krut come about?

As an artist, I have given myself the freedom to explore multiple visual languages simultaneously – I want to learn all the time, but the technical problem I was having was the difficulty of grappling with those images in painting. So I decided to collaborate with the David Krut Workshop (DKW). Before DKW, I was trying to explore the images in a painterly way, using blocks of colour, but with drypoint, using line and cross hatching became a breakthrough – especially in creating huge plumes of smoke.

I found printmaking really interesting and challenging because it forced a return for me to drawing and mark-making. I don’t think I would have gone into that direction if I hadn’t collaborated with David Krut. It reawakened my love of drawing again. I have been extremely influenced by my time there, specifically in terms of line-work and the layering of transparent colours onto marks to construct an image. My direction of work has changed significantly since working in printmaking at DKW.

What do you most enjoy about creating drypoint works? What does this process involve?

It’s funny, I had this idea that monotypes would be my first love in the printing realm, as it is closely linked to painting, but Jillian Ross (master printer at DKW) gave me a plate one day and suggested I try out drypoint on the last day I was at the Workshop.

Once the images were revealed through the printing process – the unexpected smokiness of the printed line and the atmospheric nature of drypoint – it had me spellbound straight away. I became interested in the process of having to prepare something before the mark gets made on the paper. As a painter, there is an immediate 1-to-1 relationship with the process and the result, but in printmaking you’re having to prepare and then peel the paper off after printing for the mystical unveiling of the image, which I found really exciting and quite different from painting.

Which medium do you most enjoy working with?

I love working in a lot of mediums, but my current favourite has to be the combination of acrylic and oil paint. The acrylic offers a fume-free kickstart to the painting, with really fast drying and the ability to build up layers quickly. After I have done what I can with the acrylic, I switch to oil, with its incomparable lushness and richness of colour. It’s slow drying allows me to blend, change and shift colours in a way that’s impossible with acrylic. It’s the best of both worlds.

I am working towards a solo show of paintings, drawings and prints, scheduled for October at the new Circa Cape Town. For the show, I am creating a new series of figurative paintings, set in my studio. The figures are set amongst the leftover/left behind brushstrokes that cover the walls. I am painting people that I am drawn to, and also who are themselves drawn to be painted by me. The painting that started this series was called The Boy with the Pearl Earring, which showed recently at the portraiture show at Circa Cape Town. 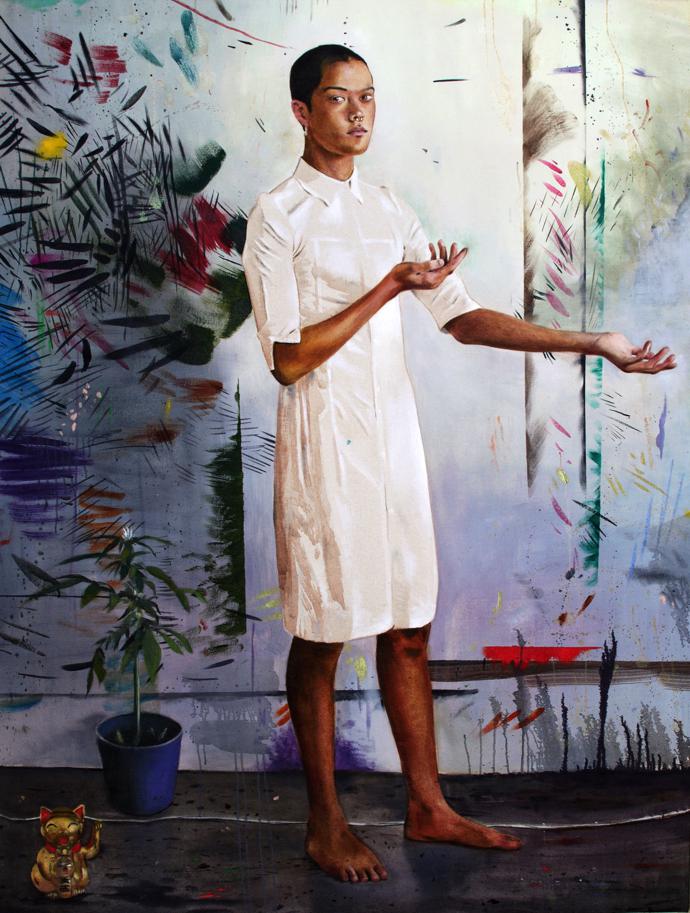 The Boy with the Pearl Earring.