Multifaceted South African artist and photographer Amy-Leigh Braaf (aka Hakopike) chats to VISI about her travels abroad, the meaning behind her work and plans for the future.

I don’t sleep anymore // self portrait series 31/12/2019 • • • Happy new year almost – by the time it’s New Years I’ll be at a party in a city I haven’t lived in for 6 years. It’s a strange time – but it’s like this every year isn’t it? Here to deep breathes, long kisses, all of the right wrong turns and moments of impact. Courage follows us and now is the time to see how much we can test ourselves. Here’s to 2020 : a year of firsts.

Tell us a bit about your background.

I grew up in Johannesburg and my childhood was filled with creativity from the moment I woke up to the moment I fell asleep. It’s strange when I try to visualise a life where I didn’t spend Christmas in Durban learning from my uncle how to paint or play the guitar. There is no fathomable way to think about who I would be now – if it weren’t for those years of practice I wouldn’t have experimented with as many art forms as I have. This was the unintentional practice of art forms I never realised I needed and used until now.

I created the name Hakopike out of nothing really. Although I know names tend to represent one’s art form and brand, I, on the other hand, felt that it was essential to separate my personal life from my art life. Not in a distant way, but simply to isolate the different personas within me.

Why did you choose photography as a medium?

I initially studied at the University of Cape Town and throughout the years I found myself drawing closer to cinematic photography. In a way, filmmaking led me to photography and as a result, photography found its way to me. I remember watching films from the French New Wave era and questioning whether I could capture cinematic moments through photography in the same way as these films did through editing.

Do you have a favourite series that you’ve created?

All of my artworks throughout the years have been somewhat serendipitous, and because of this, I find myself attached to all of my art forms, including experimental short films I’ve directed, illustrations and portrait photography. The only photo series I’ve used as illustrations, as well as in paintings, have been my Nightscapes in Tokyo. This is probably the most profound series that I’ve worked on, based on the fact that I took these photographs at 3am while walking around the city, one that I had no clue how to get around all by myself. Because of this, I associate the memory with defiance, bravery and complete bewilderment with the world I happen to exist in right now. 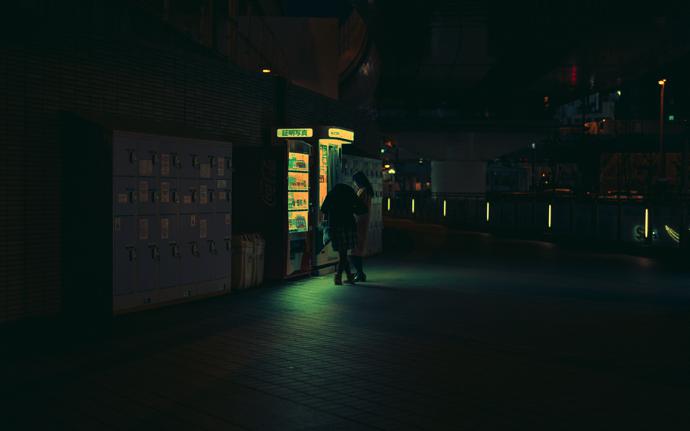 What was the process behind Nightscapes?

The Nightscapes were completely unplanned. I had decided one night in Tokyo to go outside without directions or a map and photograph the city when it was at its quietest. I had previously travelled solo to Hong Kong and during this time I had taken photographs of the buildings that I had so often seen in some of my favourite films, such as Chungking Express by Wong Kar-wai. I’ve realised that over the years inspiration tends to find itself in the footsteps of the spontaneous soul. I never trust anything I have to plan too much to obtain, but rather I focus on the subtleties of life and the blissful whimsical treats of beauty that show face when we least expect it.

What mood are you trying to convey through your imagery?

I have three art forms that I fully focus on and they are photography, illustration and painting. Each provides different fulfilling qualities, for example, my photography allows me to convey human emotion in a moment where people are unaware that others are watching them. I feel that photography captures the moments that we often miss in our daily lives. It does this regardless of whether it’s a living being or an architectural piece that makes us stop in our tracks and analyse the world around us. Illustrations, on the other hand, are completely experimental – they play with dreams, as well as alternate realities. They are simply a channel for me to visualise the compositions and otherworldly situations that dwell in my mind. My Ancient Deity series of paintings, featuring goddesses in acrylic paint with gold leaf, focused on my ancestry. These paintings help me understand what it means to be ambiguous and help me come to terms with my own identity and inability to comprehend where I come from and where I’m going.

Do you find there is a difference between shooting in Japan, South Korea and South Africa?

I feel that when I’m in certain countries I adapt to the buildings around me and not so much the people that I find myself spending time with. When I was in Japan I was completely isolated. My photographs captured my feelings at the time and the displacement I felt that I grew accustomed to as I spent more time travelling through the country. I had lived in South Korea for two years in total and I have felt that it has become a second home. My artworks in South Korea were the most personal and experimental – when you are very far from the city you grew up in it’s easy to lose yourself in your own mind. South Africa and my pieces there are always the warmest because it’s home. I feel safe and happy to convey those feelings without any external influences or feelings of isolation, like when I travel.

Which South African artists stand out for you?

A South African artist who stands out for me is Anthony Bila – I have been following his photography over the years and I am so impressed by him and his talents. He has a unique eye for moments and capturing them in ways I have never seen before. Another artist I am a fan of is Lorraine Loots, who is an incredible painter, and I respect her hard work and her ability to create pieces that continue to surprise her audience. I am also a huge fan of Tarryn Hatchett’s photography, as well as my friend Hankyeol Lee, both of whom have an incredible eye for the subtle elements held between human emotions – I am always in awe of their work.

My illustrations initially started with depictions of cinematic visions I had but did not want to turn into films. The series that I found most rewarding was my Almost Relationship series. In the series, I convey the moment between two partners before they realise that they have to discuss their emotions for each other. My second series is called Table Top and these illustrations tell stories of different peoples lives through aerial shots of tables, desks, countertops and diners. Next, I am focusing on working on brands and creating characters that can be used to convey and express what certain companies’ ethics and morals are – through the way that they present themselves. I’m still experimenting, but I am open to everything and I never stop learning. 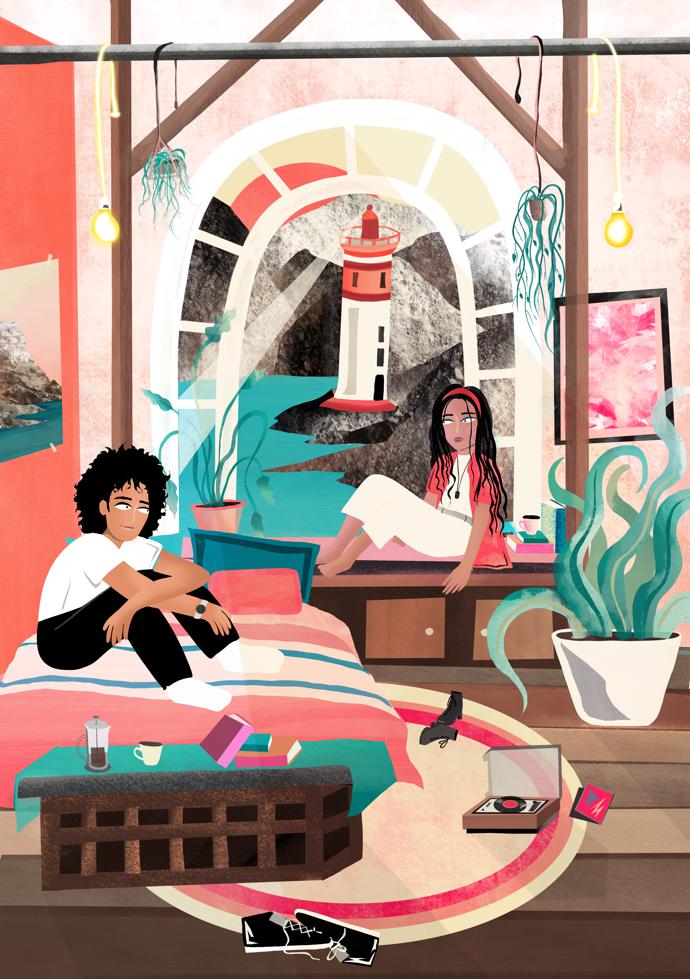 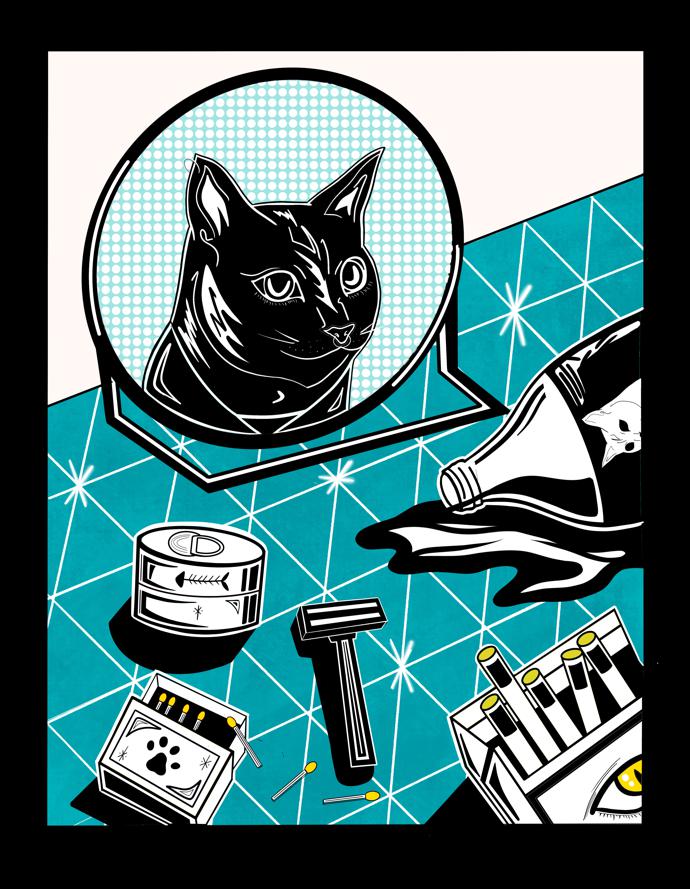 What are your plans for the future?

I plan to stay in South Africa until the end of May before staying in Finland for a residency. I will be working on my paintings there, as well as a large series of artworks on canvas. I’m also working on my online magazine and a children’s book. After years of travelling and working I’m also taking a break to fully lose myself in the work I want to create and also learn while I discover the process of what it means to create authentically. My plans for the future are to be happy. I had to find a perfect balance between all of the art forms that may have made me who I am today.

See more of Amy-Leigh’s work at hakopike.com or on Instagram.