Situated on the 8th floor of Cape Town’s iconic Holyrood building, this ultra-compact apartment combines the best of Art Deco with one of the city’s most enviable locations.

There simply isn’t a better view in Cape Town than the outlook from a Holyrood apartment on a summer evening. Sorry, denizens of the Atlantic Seaboard and devotees of Boyes Drive. Apologies, everyone in Bloubergstrand and Bishopscourt. But if you one day stand on a curvy, postage-stamp-sized balcony at this, one of the Mother City’s best-known buildings, you’ll understand. Set out directly below you is the Company’s Gardens, green and verdant, with its blend of landscaped formality and whimsically wandering humans. Beyond that to the left is downtown Cape Town and its various unfortunate high rises – and then to the right, the dramatic sweep of the City Bowl and the face of Table Mountain.

But the view is just one of the many reasons why you might want to live in Holyrood. As one of the few Cape Town buildings that can properly be called “iconic”, this narrow Art Deco apartment block is instantly recognisable and very beautiful. Plus, it’s also always attracted what one of its best-known current residents, architect Robert Silke, broadly describes as “outcasts and eccentrics”, among whom this maverick designer would undoubtedly include himself.

The building was designed by an architect named Cedric Melbourne Sherlock and constructed in the very late 1930s, on a site where two old Georgian townhouses had previously stood on Queen Victoria Street. Sherlock was also the developer and owner of the building, and designed Holyrood as holiday accommodation for working-class families visiting Cape Town, speculating that this was the best and quickest way to make the most money from them.

Unfortunately for Mr Sherlock in this case, the start of the Second World War in 1939 prevented almost everyone from taking a holiday for quite some time, and when the war ended six years later, as Robert says, “the architectural style of the building had fallen completely out of fashion”. And so, the tiny apartments – the original layout fits four small flats into each of Holyrood’s ten floors – quite quickly fell into disrepair and were almost entirely neglected for the rest of the 20th century.

In 2000, Robert was a recent architecture graduate and already an admirer of Holyrood due to his training, design proclivities and the fact that he’d walked past the building for years because his father, an advocate, had chambers close by in Keerom Street. He’d also visited New York and London where, as he says, “any apartment situated alongside a park is automatically some of the city’s most expensive real estate”. Not in the Mother City at that time, though: when he told an estate agent that he longed to live in the building “one day”, the agent laughed. He told Robert that he could buy a flat in it immediately for a pittance – in spite of the fact that, at the time, Cape Town was experiencing the first of several huge recent increases in property prices.

Robert now owns several apartments in Holyrood, as well as living here himself. “I’ll never leave,” he says. Among them is this jewel of a property on the 9th floor, which he has meticulously restored to something very closely resembling the original. That was a process that involved a great deal of effort and time, including “spending every weekend at Milnerton Market”, he says. 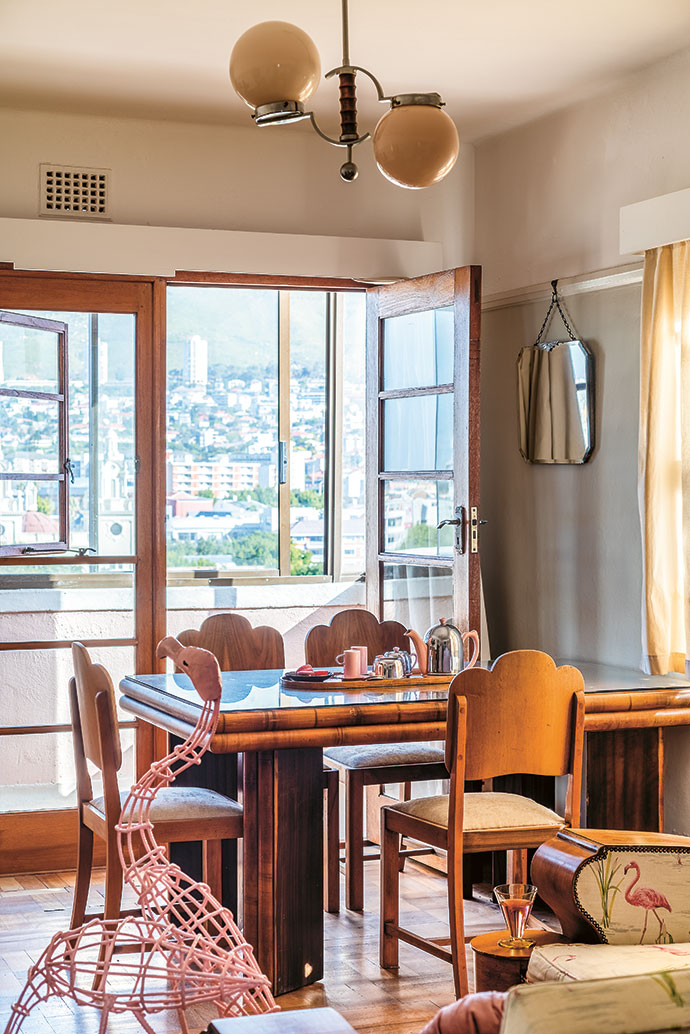 It was worth it. The details of the interior design – think oak parquet floors, restored monochrome tilework on sensuously curved walls and divinely Deco pieces that include classic light fittings, a wall-mounted heater and built-in porcelain soap dishes – are utterly lovely. And they make this very compact space, which is just 35m² in size, immensely appealing.

The apartment is divided into three rooms: a minuscule kitchen, a beautifully planned small bathroom, and a living-sleeping area that still includes the bunk beds originally built in at one end. These were, of course, intended for the two children of the four-person family that was once expected to be holidaying here. And on the far side of this charming and beautifully organised space is the balcony – and that view.