The Design Foundation Awards recognise the industry’s top achievers in design, manufacture, commercial success and innovation. Each category is sponsored by a supporter of local talent, and this year VISI was the proud sponsor of the Manufacture Award.

The Imbizo stool by ceramicist Chuma Maweni won the Object That Moves Award. As part of his prize, Chuma will receive free exhibition space at this year’s 100% Design South Africa, which sponsored the award.

Our Workshop, an open-access workshop set up by designer Heath Nash at Guga Sthebe Arts & Culture Centre in Langa, won the Design With Purpose Award. The award was sponsored by the V&A Waterfront, which will commission Heath and his team of artisans to create a dynamic installation for the precinct made from recycled materials.

Durban-based furniture and interior design graduate Lwazi Mshibe won the Apprentice Award, which places an outstanding graduate in a six- to 12-month apprenticeship with one of the top design companies in the country. Mr Price Home, sponsor of this award, has offered him a three-month internship followed by a place in MRP Foundation’s nine-month Jump Start Retail programme.

Graphic designer Bonolo Chepape of textile brand LulasClan won the Future Found Award, which recognises a young designer who has already achieved a degree of excellence with limited resources. Her vibrant designs are inspired by her Pedi cultural roots. The award was sponsored by Krone and carries with it tailored support and guidance from the Design Foundation board to help Bonolo build her brand.

Sealand Gear won the Maker to Market Award, given to a design company that understands the value of brand-building and identity, marketing and consumer interaction. Sealand manufactures bags out of old yacht sails, billboards and other waste materials and is now an internationally recognised brand sold at Selfridges, Mr. Porter and Liberty London. The award was sponsored by M&C Saatchi Abel, which will provide the winner with marketing support.

VISI’s Manufacture Award went to Hot Wired Design. The team was commended for its technical proficiency and willingness to help many local artists and designers give three-dimensional form to their imaginative ideas. From its premises in Woodstock, Hot Wired regularly take time out from manufacturing props, signage and architectural elements to share their expertise with artists.

Lastly, Porky Hefer was named this year’s Icon, sponsored by BMW. It’s Porky’s second time receiving the title, which acknowledges outstanding achievement by a highly regarded designer, based on work produced over the past 12 months. 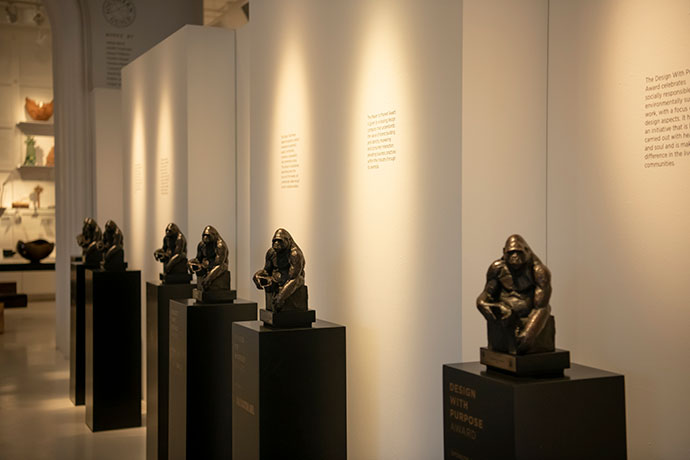 The seven winners all took home a limited-edition bronze trophy depicting a seated gorilla, made by sculptor Otto du Plessis.

“Recognising achievers in this industry not only places a spotlight on what design businesses are capable of, but allows those outside the industry to start placing more value on the commercial viability, social impact and strategic importance that design can have on economic success and global identity,” said Trevyn McGowan, co-founder of the Design Foundation and CEO of The Guild Group.