Comfort and the community of family were central to the renovation of celebrated design duo Geordi de Sousa Costa and Boyd Ferguson’s multi-generational weekend home.

My vision was to create a place of happiness, love and wellbeing for our extended family,” says co-owner Boyd Ferguson, founder of Cécile & Boyd, the design studio that single-handedly revolutionised the safari-lodge aesthetic 25 years ago.

Located in Scarborough, a seaside hamlet near Cape Point, his creation is a multi-generational retreat for himself, his sister Geordi De Sousa Costa, and their families. Named Abraça – the Portuguese word for an embrace or hug – it’s a weekend home where equal consideration has been given to everyone, from tweens, teens and singletons to family groups and oldies.

The family bought the property in 2018 for its generous double plot and inherent potential. Despite its awkward flow, an inelegant subterranean lower level with little light, and an enormous main en-suite – the only room with sweeping views of the wetlands, reserve and beach – Boyd saw enormous potential. 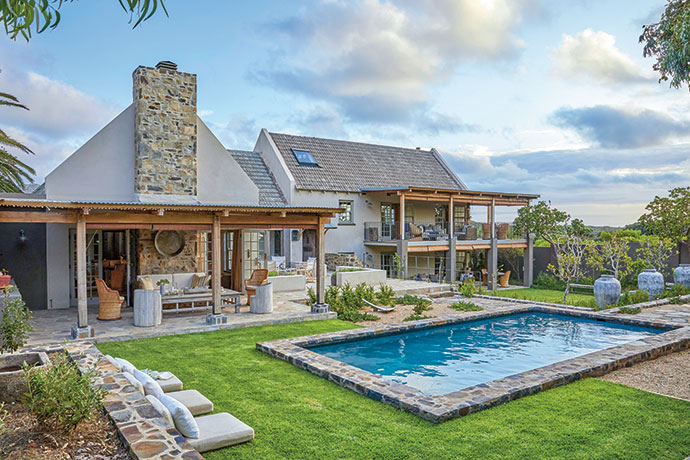 The home’s wetland setting inspired the colours and textures that were used on the exterior. “We wanted the house to disappear into nature,” explains Boyd.

His major consideration in reconfiguring the spaces was to open the house to the garden while accommodating the family’s three generations and catering for the various activities they prefer. This called for plenty of reading and fireside spaces, work desks, and garden and outdoor spaces for relaxation and entertaining. With this in mind, Boyd set out to create two distinct areas in the home. Laid out over three floors that stagger over one another, the house has been split up into three private zones: the bottom level for Geordi, her husband Anton and their three children; Boyd’s wing on the upper loft level with the living area providing a buffer of privacy between them; and their parents’ wing, which runs parallel to the downstairs kitchen and entertaining areas. 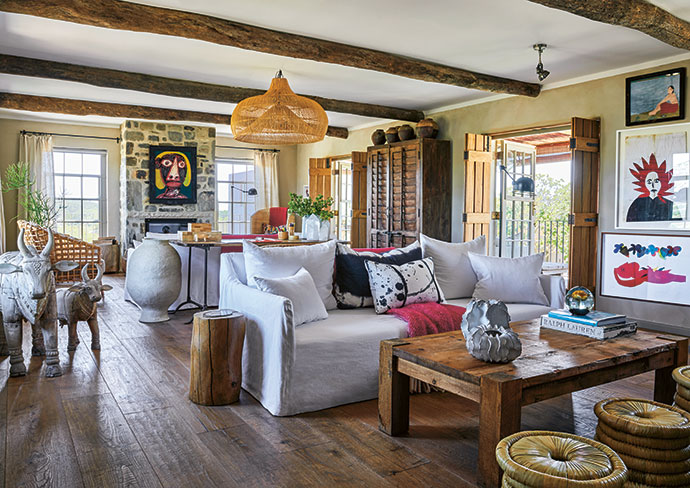 Boyd cleverly divided the generous living space into two distinct areas by placing two identical Cécile & Boyd sofas (upholstered in Romo fabric) back to back. The internal shutters were custom-made by Anton De Sousa Costa. The painting above the fireplace is by Nicolaas Maritz, the cane armchair is from Cécile & Boyd, and the sculptures of the sacred Nandi cow and her calf were sourced in India by Boyd. The light fitting is from Eight Degrees South.

Making sure that every room had access to the outdoors was a critical factor in this plan. To this end, Boyd made sure that all the back bedrooms had decks leading off them, in addition to three generous covered verandas (which are all fully furnished, as though they were interiors) that he created off the upstairs living area, the lower-level bedrooms and the kitchen. “It was important to create spaces that offered further privacy for those in search of a retreat and quiet time,” he says. 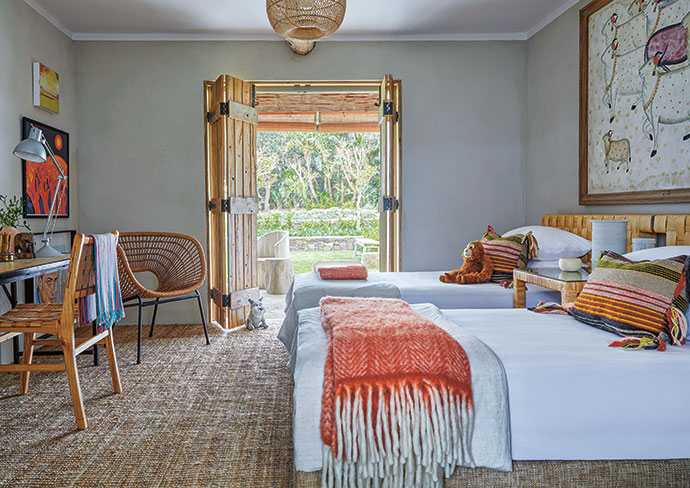 A cosy, colourful bedroom on the lower level features jute flooring by Rowley & Hughes, cane headboards by Cécile & Boyd and cushions by Coral Stephens in Swaziland.

Boyd’s brother-in-law Anton, who is a stonemasonry specialist, project-managed the building work. Anton’s innate sense of style, combined with his technical and practical knowledge, would prove a critical asset as the family strived to respect and reuse what was there rather than replace the old with the new.

For the interiors, Boyd sought inspiration from the surrounding landscape as well as the home’s existing farmhouse-meets-beach cottage architectural style. He also ensured that each and every family member – ranging in age from 8 to 80 – was considered in the interior vision. “I added pigmented colour and contemporary art for the young ones, edgy cane furniture and lighting for Geordi (who wanted modernity), and soulful Indian country antiques for Mom and Dad,” he says. “My aesthetic came in the form of the stripped, pared-down colour palette with monastic stone floors, whitewashed walls and exposed beams.”

Boyd’s partner Athol McLaggan, a landscaper and head gardener at Stellenberg Gardens in Kenilworth, was responsible for a garden that thoroughly connects to the living spaces, mirroring the L-shaped home in a series of outdoor rooms. Unlike most properties in Scarborough, the garden is completely walled, so Athol’s inclination towards an inward-looking space that allowed for a green sanctuary was inspired.

“For me, one of the most beautiful views of the house is from the pedestrian gate, looking across the garden towards the courtyard,” says Athol. “From this angle, the two wings of the house are seen on the diagonal, and look like two outstretched arms ready to embrace you.”

Abraça is available for rental through Perfect Hideaways.