For the renovation of a large four-bedroom home in Newlands, Cape Town, Bone Interior Design Studio sought to let in the light and the lush, leafy surroundings.

It took just two months to transform and modernise a dark and dated student digs, which was designed in the ’80s, into a family home for young professionals who enjoy entertaining.

“We wanted to maximise the setting by punching through much larger window openings to bring in the impressive mountainscape and light,” explains Nicola Orpen, who is one of the partners at Bone, alongside Hayley Turner. “We extended a large balcony off the master bedroom to allow the owners to enjoy the morning light hitting the mountains.”

A vertical window pan in the staircase lets in the greenery of the oak trees, and the bathrooms received wall-to-wall windows to allow the views to permeate. The back side of the house received double-glazing treatment to combat the noise of the busy road the property backs on. 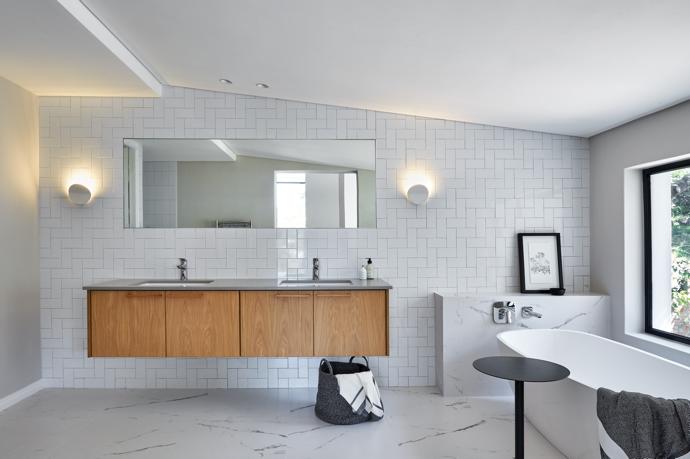 With the influx of light, the interior design duo opted for soft timbers, white cabinetry, milky stone and contemporary lighting and fixtures, which are bold in their simplicity and all the more important in an intentionally blank canvas.

Selecting and placing the lighting played an important role in the overall design. Minimal downlights perform as functional task lighting, instead of general runway lighting, and wall lights function as art pieces. The cables for the pendants were installed before the ceiling was skimmed to avoid the necessity of a cup fitting and resulting in a more sophisticated finish.

The existing timber ceiling trusses were retained and sprayed white, as was the wall-to-ceiling timber within the cottage loft, which was painted in high gloss. Internal face brick walls were freshened up with a coat of paint that still provides a textural element that complements the clean, modern finishes, and the external face brick was plastered. The staircase was moved to create wider passageways, breathing room and a new internal flow. 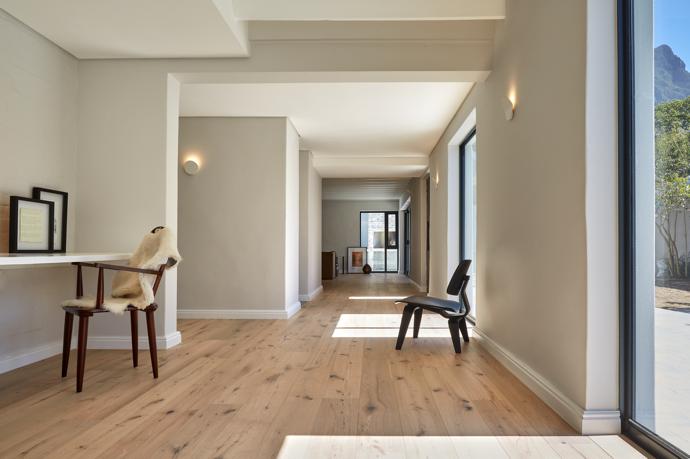 “For me the triumph is in the overall dramatic change in energy,” says Nicola. “The house had a dark, heavy feel and we were committed to changing that completely. It’s now more connected to the mountains, light and surrounding leafy vitality. The master bathroom has a special luxury feel as does the dressing area and I still love the concept of the guest toilets’ wild personality contained to its tiny space.”

View more projects by Bone here, find the studio on Instagram (@bonedesignstudio) and check out other striking before-and-afters here.