The Joburg Contemporary Art Foundation (JCAF), a multi-functional platform for research, innovation and the elevation of contemporary South African art, is hosting its inaugural exhibition.

Nandipha Mntambo and Berni Searle, both from South Africa, Wangechi Mutu (Kenya/USA), Shirin Neshat (Iran/USA) and Bharti Kher (India) present work under three realms, where the artists take on the chosen roles of the mother, warrior or hybrid.

The first theme is configured around the Fall, where the biblical notion of the Garden of Eden meets the human world. The second theme explores the animal-human hybrid, which in this case refers to the intermingling of cultures, races and species. The third theme delves into the intersections of race and religion, with an intimate look at the transformative ageing process women go through, or whose faces are concealed behind veils. The third theme serves as a reminder to the viewer that the body is real and not just an abstraction of ideas. 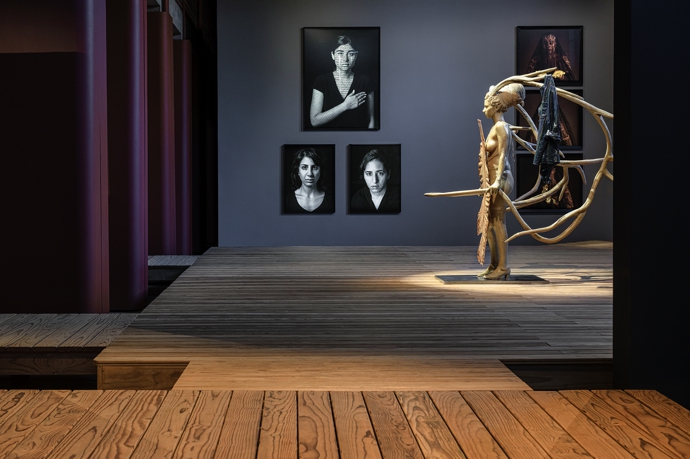 Conceptual artists and cultural critic Lorraine O’Grady expresses this conceptual framework of identity bridges: “Because I was raised by West Indian parents in one of the most traditional areas of New England culture, Boston’s Back Bay, my childhood placed me at a distance from wherever I stood and required me to always build a bridge to some other place. One had to be several things at once… both Caribbean and New England, both African American and West Indian, both black and white… and to daily negotiate the differences.’’

The exhibition invites viewers to confront their own ideas of women in third world countries through an intimate lens unmarred by societal censorship. Clive Kellner, the Executive Director of the JCAF and curator of the exhibition, notes that it is of significance that the artists are women of colour whose individual bodies of work constantly question the Western gaze, race and identity. “As issues of race and gender have become so politicised and polarised, hybridity may represent a productive line of enquiry for understanding our national, communal and individual identity formations,” he says.

Contemporary Female Identities in the Global South is open to the public until 30 January 2021 (appointments can be booked online), and a virtual tour is available online. Admission to the JCAF is free.