INTERVIEWED BY Michaela Stehr IMAGES courtesy of Pony of the Sea

Cape Town-based illustrator and graphic designer Katya Wagner (aka Pony of the Sea) chats to VISI about what inspires her drawings and how her artistic journey began.

How did you come up with the name Pony of the Sea?

At the core of what I do is telling stories. I wanted a name that was just unique and whimsical enough to want to know what the story was behind it. What is the pony doing in the sea? What are its motivations? That’s the long version. The short version is that a “Sea Pony” is a cute name for a seahorse, and that gamer tag was taken, so I became Pony of the Sea.

What inspires your creations?

I really enjoy making people think, and a lot of my work revolves around creating pieces that seem to be imbued with meaning. The secret is that the viewer instils their own meaning based on their personal frame of reference. Of course, my own influences can be seen in each image. I love history, mythology and folklore, weird antiques, dark stories and cute animals (especially cats with their historical link to femininity). The idea that you could potentially find Narnia at the back of an old wardrobe packed with dusty clothes fascinates me to this day.

What mediums do you use?

My art contains some contradictions. I love drawing in black fine liner or ink, but at the same time, I really enjoy drawing digitally with a Wacom tablet. The work is usually black and white or super colourful. More recently I have been trying to draw on 3D surfaces like pots, toy horses and shoes. 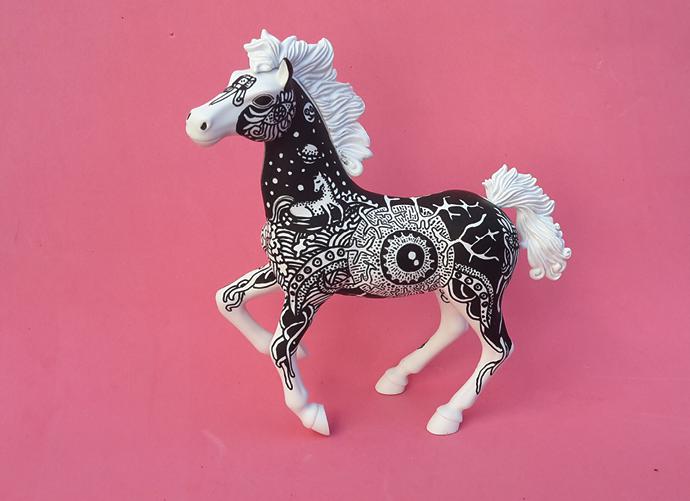 How did you get into illustration?

The story is usually similar for many artists, but as a small child, I was introverted and enjoyed nothing more than breaking out some crayons and drawing cats. As I got older I discovered Microsoft Paint and Photoshop. I went on to study design at Vega School. The real constant in my life has been doodling on any piece of paper I could get my hands on, during classes, lectures, meetings and coffee dates. Eventually, it became obvious that since I wanted to draw all the time anyway I should take a crack at making it a career – which I officially started doing about two and a half years ago.

What has been your favourite drawing to date?

There’s a drawing I did a while ago called Dance of the Dead inspired by the eponymous Iron Maiden song. I was just starting to get into illustration as a serious career choice (after sticking out a couple of years in design – although I like to say I’m a designer by day and illustrator by night). It was the first drawing where I felt like my skill was finally starting to accurately portray the ideas in my head. It takes a lot of practice and grunt work to get your art to a standard where you actually start to like it, and this piece symbolised that for me. 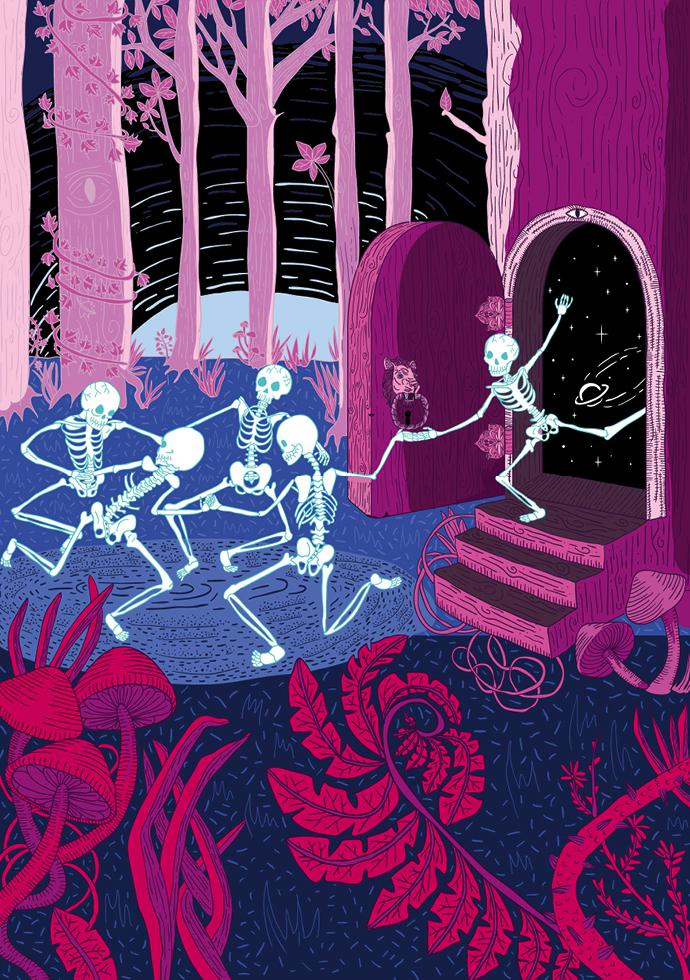 Dance of the Dead

Do you have any local illustrators who are on your radar?

There are so many amazing illustrators in South Africa right now I couldn’t mention them all in one sitting. Off the top of my head (on Instagram anyway) @cosmicluckybag who does amazing cat illustrations in ink, @conradbotesdotcom, @thegerhard and @reetreweek have been doing cool stuff for years. @joh-del, @karabo_poppy @neeskealexander, @art_by_david, @danielhugoillustration and @fiance_knowles. And of course, I’d love to shout out my fellow illustrators @gwendolene.illustration and @drawnbyamber, along with the other amazing women I met through @unblush_collective who I’ve watched grow over the past two years.