South African artist and self-proclaimed “maker of things” Chris Auret shares with VISI a selection of his latest murals. 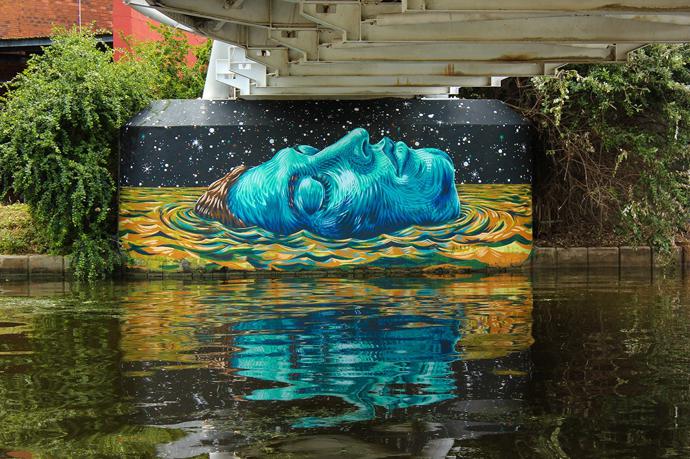 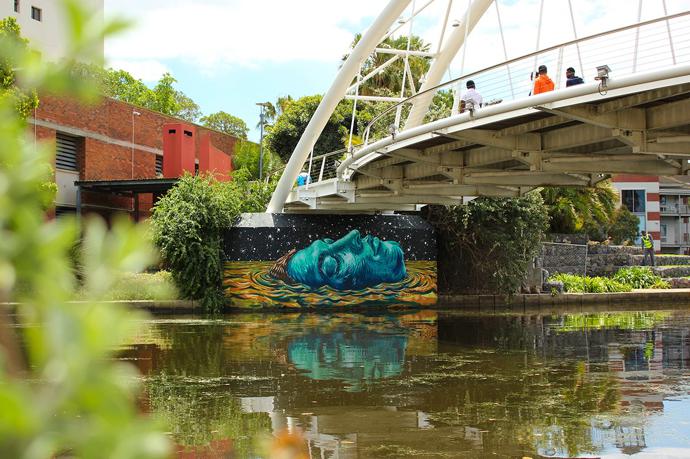 “I was chosen by the Century City Arts Foundation to create a mural in an interesting position under a pedestrian bridge, placed on its growing public “Art Walk” of varying sculptures, mosaics, murals and other installations. In our fast-paced world, this piece draws on the serenity at the water’s edge to offer a quiet, reflective moment for the viewer. The mural depicts an intimately contemplative scene – the figure suspended within a vast universe, beyond space and time, held by a body of water. Their closed eyes and faint smile create a sense of surrender and peace as they submerge and emerge, seemingly at once, in an eternal moment of bliss. With iridescent blue skin and androgynous nature that transcends the boxes which separate us, this being becomes a reflection of both the uniqueness and oneness of all who pass by.” 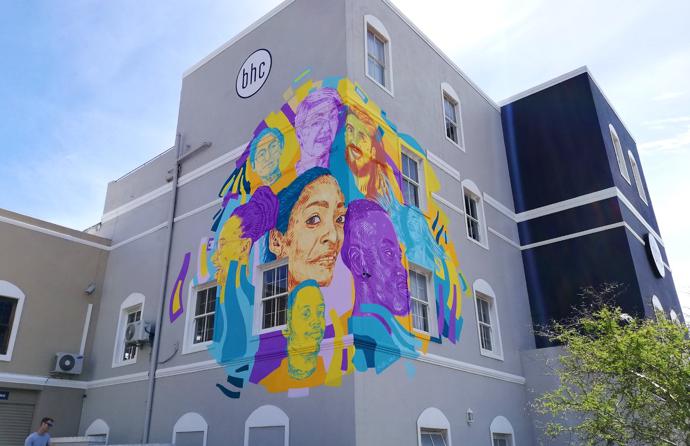 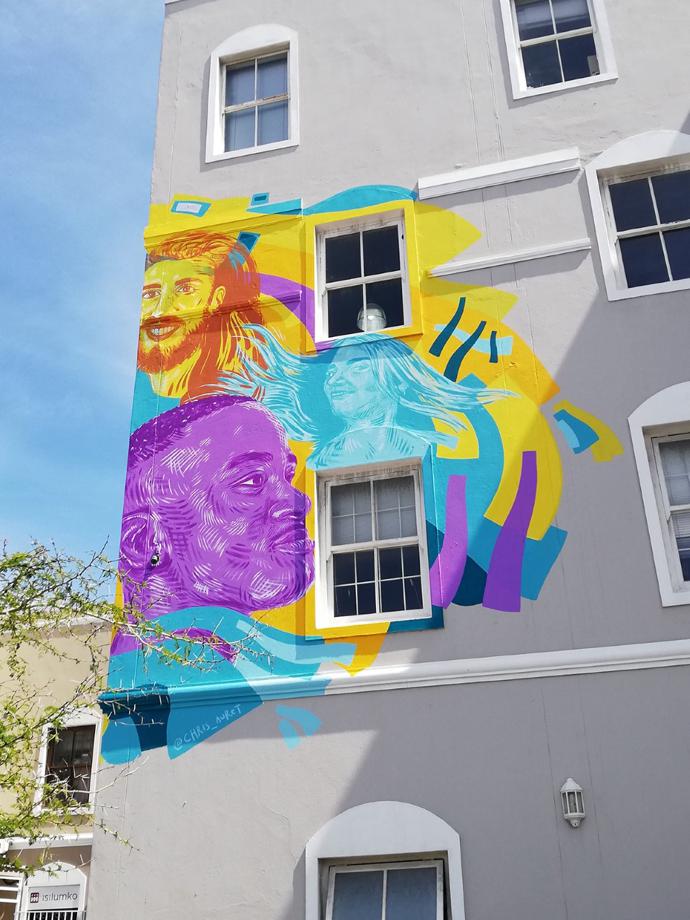 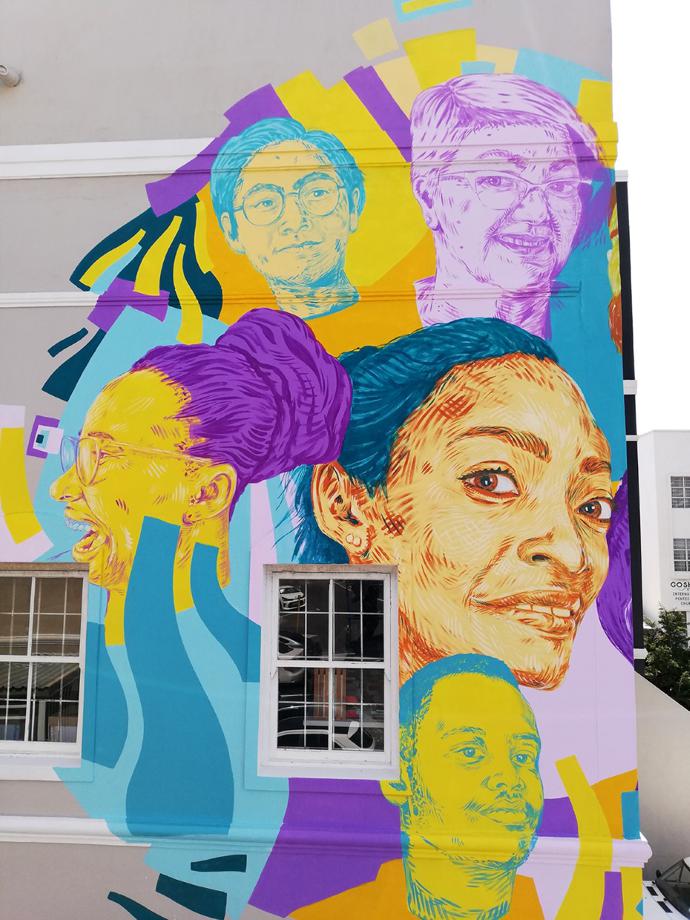 “BHC is an interior design college in Cape Town. I was commissioned to create a piece on its campus building in Salt River, Cape Town. The concept became a colourful celebration of the diverse beings that inhabit the building. Painting portraits is common in my work; aiming to highlight our unique traits and stories as individuals but at the same time bringing us together in a celebration of our unique place within the larger community. I organised a day where I met and photographed over 40 students and staff who were willing to have their face enlarged and placed in a public space. Of these, eight faces were chosen to represent the whole. The mural took 4.5 days to finish and is one of the largest pieces I’ve yet to create.”

The Sunbird on the Wilde Dagga 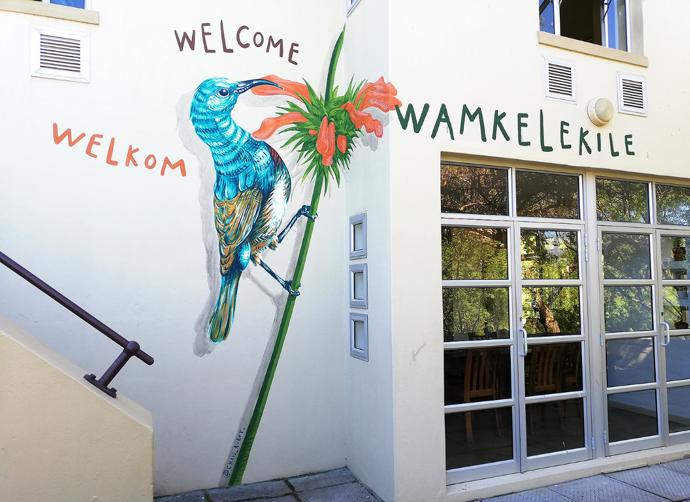 “I was commissioned by the Sustainability Institute in Stellenbosch to create a welcoming mural, drawing attention to the entrance of the building. The inspiration came from the thriving natural surroundings, especially the indigenous flora. I decided upon a Wilde Dagga plant, known for its medicinal qualities and seen dispersed around the gardens. The sunbird is a common visitor to this plant and is in itself a symbol of sheer and natural beauty, with its jewel-like colouring. They bring with them a sense of joy, bliss and a sweet sense of abundance to lighten up any day and space.”