The secret to inviting a sense of calm into a small space? For the resident of this compact studio apartment, the answer lies in selecting pieces of significance.

Tasha Tyler isn’t one for trends. That said, she’s been uncannily adept at being ahead of them. She was, for example, an early adopter of the Balinese decor trend in South Africa, having established a successful business importing and selling one-of-a-kind pieces from Indonesia in the late ’90s. And when, more than a decade later, the business had run its course and she was left with two storage spaces filled to the rafters with remaining stock, she applied the principles of reigning keep-it-neat queen Marie Kondo to help sort and sell anything she didn’t want any more. “It’s so liberating to look at your possessions, acknowledge that they played a part in your life, and then let them go,” says Tasha, seated in the airy lounge area of her studio apartment on Cape Town’s Kloof Street.

Last year, Tasha fell back on Kondo’s famous Konmari method when she relocated from a one-bedroom flat in Sea Point to her current residence, a 38 m2 converted double garage on the property of her partner, photographer Jac de Villiers.

“Even though I’ve lived in large homes, I’ve always been attracted to small spaces with an edge,” says Tasha. “When you move to a smaller space, you stop constantly buying new things. Instead, every item you have in your home is considered. Something you find beautiful. Something significant.”

This approach translates into an open-plan space punctuated by small overlapping islands of activity, adorned in carefully chosen vintage finds, heirlooms and art. 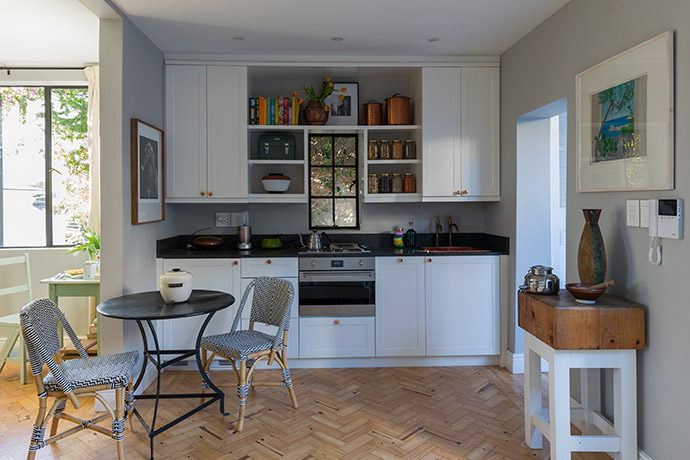 Bucking convention, the heart of Tasha’s home isn’t the kitchen but a Cape-style tolletjie bed dressed in luxurious off-white linen and flanked by a pair of original Anglepoise lamps in Tasha’s favourite colour, sage green.

Above the bed, a pair of framed photographs from Jac’s Vetplant series completes the tranquil vignette “I do everything on my bed: relax, organise events, count my money…” says Tasha with a laugh, referring to the takings from her regular weekend gig heading up the coffee stall on Market Day at Oranjezicht City Farm Market.

Another hotspot in Tasha’s home is the lounge area, where she loves sinking into a mid-century chrome lounger that offers a great vantage point from which to admire her art collection. An especially sentimental piece for Tasha is an Alice Goldin silkscreen print of a krans called Die Spuitgat (The Blowhole) in Arniston/Waenhuiskrans, the site of family holidays when Tasha was growing up. “You know how my brother raps he was born in the Spur?” she says of her sibling Zander, whose alter-ego is Jack Parow. “Well, my sister Tanya and I were basically born under that rock!”

Extending the floor space, Tasha’s lounge opens out to a courtyard that houses her collection of succulents, a linen sun lounger where she soaks up some vitamin D, and an outside shower. 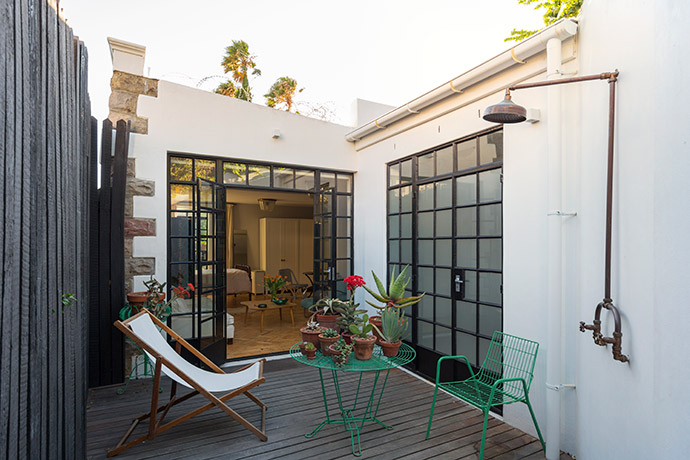 Also opening out to the courtyard is Tasha’s bathroom. Clad in gleaming white tiles from top to bottom, it’s spare and modern, with the only embellishments being thoughtfully selected fixtures, which include an industrial enamel sink, chrome medical taps and a bathroom cabinet that Tasha reappropriated from the family beach house, WackoWacko. “It still smells like TCP and drips with nostalgia!” she says.

Although there’s a perpetual din of street life in the background (Tasha’s apartment is a stone’s throw from several restaurants and a taxi stop, no less), the apartment is a serene space bathed in natural light thanks to steel-framed glass doors at both the west and east entrances.

“There is something very inviting about this space,” says Tasha. “I step in here and feel calm. My ambition in life is to have studios like this all over the world and travel between them.” Now that sounds like something worthy of sparking joy, hey, Miss Kondo?