The threshold between guest and nature falls away through daring design at &Beyond Tengile River Lodge, a game-changing new safari destination on a bend in the Sand River.

Made up of private concessions, Sabi Sand Game Reserve is the undisputed sharp edge of safari in South Africa. It offers almost-guaranteed up-close encounters with leopards, lions and other predators. With the opening of Tengile River Lodge (“tengile” is the Tsonga word for “tranquil”), &Beyond has raised the bar in this fiercely competitive arena, already resplendent with big-hitting lodges such as Singita and Londolozi.

With demand for five-star beds in Sabi Sand Reserve at an all-time high, upending existing expectations of traditional safari lodge design was long overdue. “We wanted to give our guests what they crave most: space,” says &Beyond CEO Joss Kent.

At 200 m², the nine guest suites are currently the largest rooms in the reserve. Designed by safari experts Nicholas Plewman Architects to exacting eco-friendly, energy-efficient standards, the lodge quietly inhabits the riverine forest on a curve of the Sand River.

The lodge design is respectful to the landscape, blending into its river setting so it is almost invisible to the passerby, be they human or animal.

Of the low-slung buildings, Nicholas says, “They’re designed to be a well-considered framework for the guest experience rather than trying to be the experience itself.” The buildings feature unobtrusive flat roofs coated in sand from the site and seamless terrazzo floors. These are flecked with crushed stones from the track beds of the historical Selati Railway Line that once ran through the Lowveld, transporting gold from Johannesburg’s mines to the coastal port of then Lourenço Marques.

Inspiration was taken from the pioneering spirit of a former landowner, Harry Kirkman, who made the transition from big-game hunter to conservationist, serving as section ranger in the Kruger National Park between 1933 and 1958. Interior designer Michele Throssell’s bold and glamorous interpretation of an adventurous life in the bush incorporates burnished rattan and cane, aged brass, khaki leather, hand-printed fabrics and bespoke hand-woven cotton Coral Stephens throws.

“We looked into the details of the natural surrounds,” Michele says, “from the dappled sunlight filtering through the trees to the patterns and textures of river sand, bark, rich soil and, of course, plants and animals.” Local designers such as Egg Designs, LUND Rug Gallery and Coral Stephens add an important element of South African craft. A generous living space leads outside to a stoep, ideal for a siesta after a fresh, modern Ottolenghi-style lunch spread or a swim in the deep private pool.

But it’s the spa-like, glass-walled bathroom that truly encapsulates the tranquillity of the setting. A bold floating vanity in striking rainforest-green marble resembles a bird’s-eye view of the reserve, with rivers snaking through it. Beyond the lodge’s extravagance of space lies an even greater luxury: Guests have access to 10 500 hectares of prime wilderness in the less-crowded south-east of the reserve, and exclusive traversing rights on parts of neighbouring Lion Sands Game Reserve and the Charleston area. 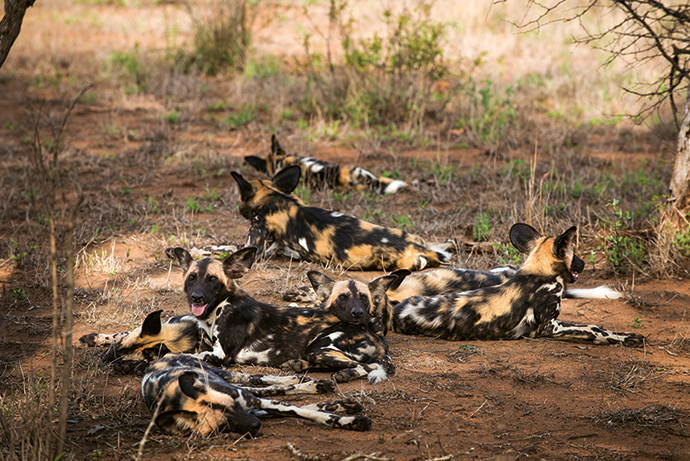 The endangered African wild dog is doing well in Sabi Sand Game Reserve. It’s often called a painted wolf, after its scientific name, Lycaon pictus. It is, in fact, neither a dog nor a wolf, but is the only species in its genus.

Sightings of leopards, prides of lions, and big elephant and buffalo herds are typical of the twice-daily game drives. Back in camp, days are as relaxed or busy as you wish. Africology spa treatments, cookery lessons with the chefs, wine and cocktail tastings in the boma, and post-indulgence workouts in the glass-walled gym are all possibilities if you ever tire of the wildlife in Sabi Sand Game Reserve.