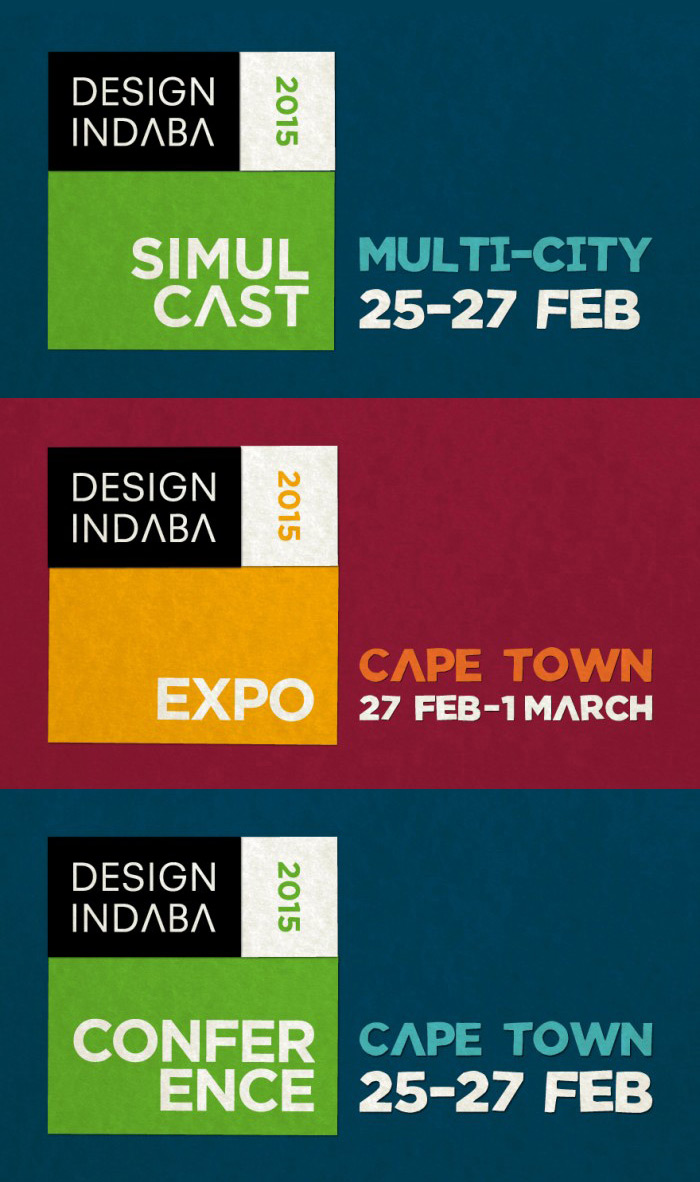 Creatives are buzzing as the 2015 Design Indaba Festival approaches, running from 20 February until 1 March. Here’s what the VISI team can tell you so far…

The Design Indaba FilmFest is back for another year of exciting documentary screenings and premieres.

The festival will run from 20 February to 1 March at The Labia Theatre on Orange Street in Cape Town for a series of one-night-only screenings.

Here is a list of what is being screened so far:

Tickets cost R50 each. For more information about bookings and schedules, visitdesignindaba.com.

Michael Bierut: New York City-based graphic designer will not only MC the conference (as he’s done for many years), he’ll be speaking too.

Roy Choi: Nicknamed ‘the godfather’ of the food truck movement, this Korean-American chef collaborated on the movie titled Chef about street food culture.

Santiago Cirugeda: Known as an activist architect, Santiago brings life into under utilised parts of his city.

Selly Raby Kane: This Senegalese fashion designer has an unusual style comprising of 3D shapes, patterns and other interesting materials.

Rosita Missoni: Famed for the Missoni brand which has won numerous artistic, academic and fashion awards, Rosita has created a textile legacy in the fashion industry.

Emily Oberman: Her keen understanding of branding, design and humour has lead her to work on shows such as Jimmy Fallon and Saturday Night Live.

Sindiso Khumalo: SA fashion designer based in London, Sindiso fuses Zulu and Ndebele heritage with Western movements in her label that has been featured in Vogue magazine.

The Workers – Ross Cairns and Tommaso Lanza: This digital product design studio uses technology to create interesting new experiences. The Workers have designed and produced projects for a variety of galleries including the Tate Modern.

Studio Propolis: This Kenya-based furniture studio has been run by couple Bethan Rayner and Naeem Biviji since 2005.

William Kentridge: Arguably the most successful South African artist of all time will be giving a performance lecture at the conference.

Studio Formafantasma: This design studio is made up of Amsterdam-based Andrea Trimachi and Simone Farresin.

Casey Neistat: Not only a film maker and actor, this New Yorker has a massive YouTube following for his short online films.

Stanley Hainsworth: A branding and design guru, Stanley has worked for huge global companies such as LEGO and Nike.

Shubhankar Ray: With a variety of award-winning international campaigns under his belt, G-Star Raw’s Global Brand Director Shubhankar Ray spends his time reinventing and redefining the meaning of ‘brand’.

Hella Jongerius: Her design company, Jongeriuslab is just one of the many examples of this Dutch designer’s multiple talents.

Dan Wieden: You know the slogan ‘Just Do It’? He coined it.

Dominic Wilcox: Best described as a creative inventor, the Variations On Normal creator combines art and design to create the unusual.

For more information about tickets, the conference and the expo, visit designindaba.com.