South African interior designer Hubert Zandberg’s eclectic home in one of London’s cultural and architectural landmarks is all about his collectors aesthetic.

With homes in London, Paris, Berlin and Cape Town, celebrated South African interior designer Hubert Zandberg has a fail-safe formula for decorating his homes. “Wherever I go in the world, I turn my immediate environment into a small town,” says Hubert, who grew up in the Karoo, a vast semi-desert region in South Africa. “For that reason, I’d always loved London’s Notting Hill as it emulates the small-town community of my childhood where it’s possible to be known by name at your local café, grocer and bookshop.”

Having lived and worked in London for the past 25 years, Hubert’s eponymously-named interior design business is located in Notting Hill too. “It’s safe to say I have a healthy obsession with the area,” he says with a grin. “I’d been looking to buy a property in the area for years but had never found anything that felt right, until earlier late last year when I viewed a two-bedroom apartment in the city’s iconic Television Centre in White City.”

Cultural icon aside, the grade-2 listed building is also an architectural landmark, considered by many to be a Mid-century Modern masterpiece. “I remember walking into the lobby with its incredible mosaics and generosity of space,” says Hubert, “and feeling overcome by the sense of history here. It was pretty much a done deal before I’d even seen the apartment.” 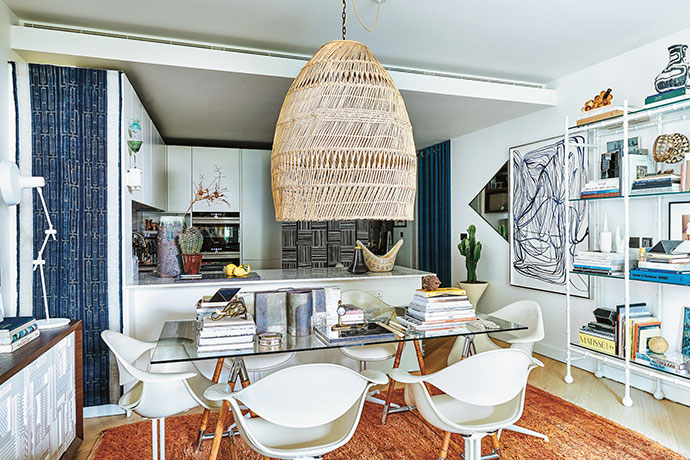 Of course, his 100m² apartment more than lives up to expectation with its open-plan living, dining and kitchen areas that look out through massive windows onto a leafy park. As a voracious and international collector of modernist furniture, art and objet, Hubert’s belief that a considered collection of disparate styles, eras and decorative traditions automatically make a home feel more authentic and soulful is perfectly articulated here.

“A collector’s aesthetic is a lot less prescriptive and much more personal. Most of these things have travelled with me from my first home and yet are still as relevant and appropriate for me, now as then. And I expect to use them later in a beach house or country bolthole environment too.” It’s a look that not only values longevity over trend, but that Hubert uses regularly to transform a space without the need for a single, structural change. Serendipitously, it was this insight that prompted his decision to live in his apartment before making any structural changes. “I moved in with a collection of my personal things and a selection of prototype furniture from the HZI collection, with the idea to test each piece by living with them and experiencing them in situ,” he says. 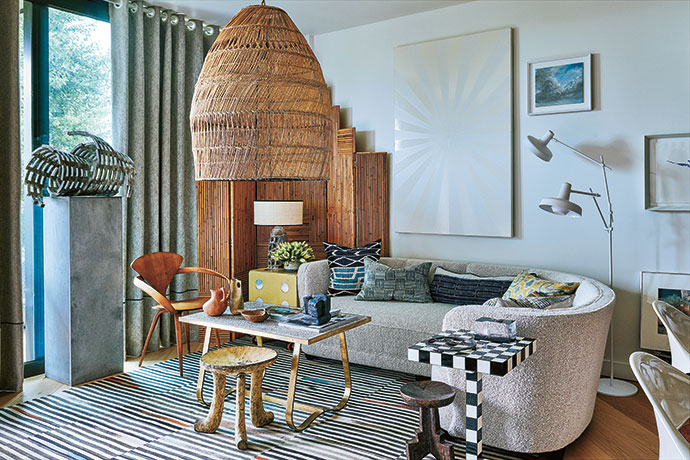 In the living room, a curvaceous custom designed sofa by HZI takes centre stage. Hubert’s trademark introduction of texture by way of the seagrass lampshade and vintage bamboo screen grounds the space, as does a kilim rug from Tim Page. This is layered with designer pieces such as the chessboard table from Moooi and mid-century chair by Norman Cherner.

Then COVID-19 happened and Hubert, who usually travels incessantly, found himself at home for months on end giving his prototypes their most rigorous testing yet. “What struck me most profoundly was the realisation that creating a visually inspiring home has little to do with money and everything to do with understanding how you live and seeing your home as a creative space.” While living with a tightly edited collection of only those things that he absolutely loves is a personal mantra for Hubert, he predicts this will become increasingly essential in our homes, with throwaway “stuff ” making way for the demands of juggling work, family, exercise, entertainment, cooking, gardening and access to nature. “We’re going to have to totally reimagine how we live and work, so that when – not if – the next pandemic comes, we can slip into bunker mentality with ease, confidence and comfort. There’ll be a lot of paring down and decluttering in the wake of this pandemic.”

All the while, Hubert’s enjoying the “small town vibe” that Television Centre offers, complete with a sunset that could give the Karoo a run for its money. “The apartment is west facing so I get the most intense sunsets – of course, in the Karoo it’s the dust that gives it that spectacular glow while here it’s the pollution, but be that as it may, the similarities are nevertheless a comfort. I also like the fact that the closest road to me is called South Africa Road – yet another sign that, with age – I’m reverting to type.”