Architect and designer Hanno de Swardt of Onnah Design helped to see the potential of a dilapidated 1960s home in Milnerton, Cape Town, sensitively modernising it by opening it up while retaining characterful details.

It took six months to renovate the 183 m2  north-facing three-bedroom home surrounded by a large garden. Confined, separate rooms were connected in favour of an easy flow and open-plan living. In addition, former staff quarters adjacent to a single garage were turned into another garage, with loft storage, and a large laundry and scullery off the kitchen; a single toilet in the corridor made space for built-in cupboards in one of the bedrooms; and an en-suite was added to the master bedroom.

“The house itself, even in its sad state when purchased, inspired me,” says Hanno. The high ceilings reminded him of a church or cathedral and were an element he incorporated into the new design. The front door and entranceway is completely transformed with floor-to-ceiling glass that draws the eye upwards and emphasises the home’s volume.

“Even though I am all for updating buildings, certain period features are just too classic or important to ignore or do away with. The roof with its sloping ceiling and the stone-clad fireplace are two such features that I ‘saved’ and decided to celebrate.” 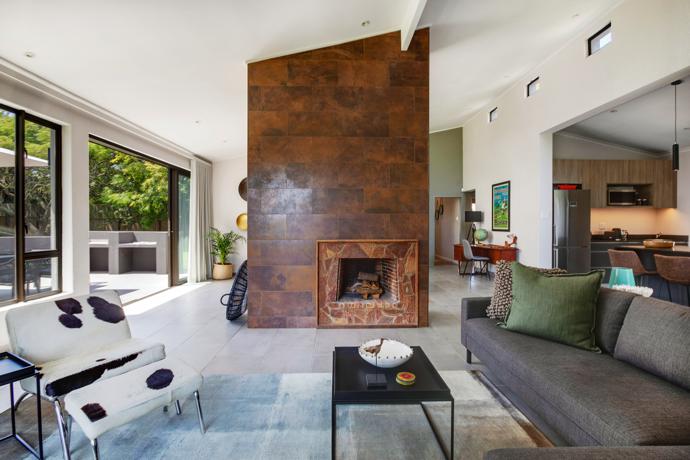 He continues, “The fireplace is now even more of a feature, clad in tiles that complement the original stonework. I love the positive tension between the modern, slick tiles and the more rustic textured stonework.” The sloped ceiling was painted in a crisp white and finished with a simple cornice.

To offset the property’s low rectangular form, Hanno designed a circular outdoor patio and bench. Taking a cue from fashion, he used colour blocking in his choice of exterior paint colours, creating contrast and diminishing the scale.

“I’m a firm believer in open plan living and a strong connection between inside and outside,” Hanno says, “Opening up the kitchen, living and dining rooms has made the space read as one meaningful, airy whole with beautiful light at all times of the day, and there’s an effortless flow onto the outdoor braai patio.”

See more of Hanno’s before-and-afters here and you can find him on Instagram (@onnah_design).